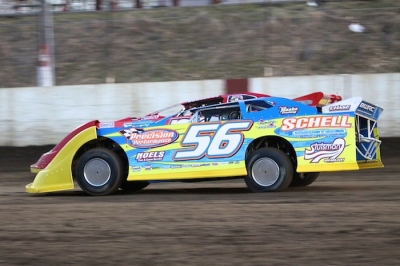 Polesitter Jeff Aikey of Cedar Falls, Iowa, led most of the first half of the 35-lapper and pressed Eckrich to the finish before slowing with a broken rear end coming out of the last turn. Tyler Bruening of Decorah, Ohio, Mike Murphy Jr. of Colona, Ill., Jay Johnson of West Burlington, Iowa, and Joel Callahan of Dubuque, Iowa, took advantage of Aikey's misfortune. Aikey coasted across the stripe in sixth.

Aikey drew the pole and went back and forth on the Farley half-mile oval with Bruening before the third-starting Eckrich took the lead on lap 17.

Aikey nearly returned the favor but a lap 22 yellow erased his pass for the front spot. The final caution came with four laps left but Eckrich, the 2011 series runner-up, stayed fastest to the checkers.