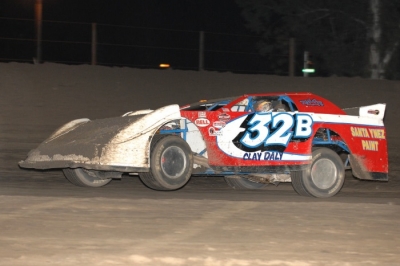 "Starting fifth, we knew it was going to be tough with drivers like Bobby Hogge, Jason Papich and Steve Drake. We got lucky with lapped traffic and were able to get around all of them," said Daly, the night's fastest qualifier among 18 entrants. "Passing Bobby Hogge and Steve Drake is awesome. Last time we ran here we ran second to Bobby. He beat us by three-quarters of a track."

Drake and Papich started on the front row of the 30-lapper with Papich getting the jump at the outset. A.J. Kirkpatrick of Watsonville ran second early before a turn-one bobble allowed Hogge and Drake past.

With Papich facing lapped traffic on the eighth circuit, Hogge took command while Drake and then Daly dropped Papich back to fourth. Daly took second from Drake on the 10th lap, then used lapped traffic to advantage to steal the lead from Hogge on lap 17. Five laps later, Hogge slowed to draw a caution that ended his night.

With rain sprinkles beginning to fall, Daly led the final eight laps to take the checkers over Drake and Papich.

Notes: Daly's Pete Van Iderstine-owned Victory Circle Chassis is sponsored by Santa Ynez Paint. ... Daly notched his second career WCS victory. ... The event honors the late Gary Jacob, a far-traveling motorsports journalist who was based in Turlock, Calif. Jacob, who died in 2006, racked up as much as 60,000 highway miles a year covering scores of auto races. ... Weather threatened throughout the night with competitors remaining loaded up until nearly 6 p.m.; wheel-packing eventually commenced the the racing beat the rain. ... Oregon invader Billy Workman Jr. scratched from his heat race but was able to finish sixth in the main event. ... Next up for West Coast Shootout competitors is a $5,000-to-win Memorial Day weekend event at Santa Maria (Calif.) Speedway.