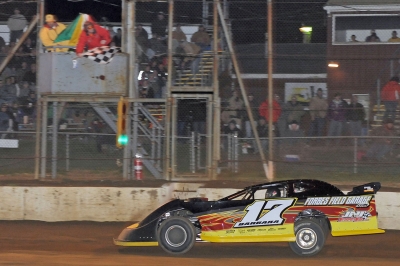 Barbara shrugged off numerous challenges from Gregg Satterlee of Rochester Mills, Pa., and successfully navigated lapped traffic for his third win in his last six starts dating back to the 2011 season. | Slideshow

“I knew Satterlee, (Ben) Miley, (Dennis) Lunger ... all those guys were going to be tough; they’re all good here,” Barbara said. “I could hear (Satterlee) back there, he definitely drives a little harder than I do. I didn’t think we were going to be able to get through lapped traffic the way we did tonight but it seemed to work out in our favor.”

Barbara was never seriously challenged for the race lead but Satterlee stayed with the race winner for a majority of the event. The leaders caught lapped traffic seven laps into the event with Satterlee closing to within one car length of Barbara before Satterlee jumped the cushion in turn two, breaking his momentum and springing Barbara to the win.

Satterlee settled for the runner-up finish while Russ King of Bristolville, Ohio, finished third in front of Mike Knight of Ripley, N.Y., and Jared Miley of South Park, Pa.