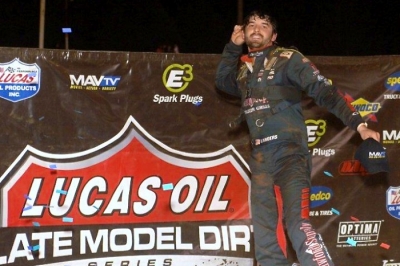 The polesitting Landers kept the second-starting Owens at bay in leading the caution-free first 48 laps of the race, but lost the top spot when Owens dove underneath him following the race’s only restart with two laps remaining.

Owens pulled ahead of Landers down the back straightaway on lap 49, but Landers battled back in turns three and four, pulling alongside as the two drivers took the white flag dead even.

Landers dove hard into turn one to regain the lead on the final lap, but Owens used a strong run off of turn two to pull even once again on the back straightaway. Owens drove his car hard into turn three, but couldn’t quite complete the pass, allowing Landers to power back ahead on the high side.

Landers made his car wide as the leaders drove down the front straightaway for the final time and crossed the finish less than a car length ahead of Owens for the third Lucas Oil Series victory of his career.

“I didn’t even know it was two to go. I got passed and I was like ‘that is the white flag. This ain’t good; I’ve gotta pick up the speed,’ ” Landers said of his late battle with Owens. “I didn’t think I was gonna get him off of four because I got up over the crumbs, but luckily this Roush-Yates powerplant pulled right out of it. Once I got off turn four I used up all of the straightaway. I said ‘if I’m gonna wreck, I’m gonna wreck now.’ ”

Still looking for his first victory of the season, Owens settled for his third consecutive runner-up finish while 14th-starting Steve Francis of Ashland, Ky., made a strong charge through the field to finish a close third. Leading Lucas Oil Rookie of the Year contender Jonathan Davenport of Blairsville, Ga., was fourth with Duke Whiseant of Texarkana, Ark., rounding out the top five.

“We had a last ditch effort there when they went green-white-checkered. We swapped the lead a couple of times and it was a heck of a race,” Owens said. “Hats off to Jared. He drove a good race and it was a fun. I’m sure everybody got their money’s worth tonight.”

The late battle wasn’t Owens’ only bid to take the lead. He pressured Landers for nearly the entire distance, even pulling nosing ahead briefly as the leaders raced through traffic on lap 33. But Owens never could complete the pass on a track surface that had a number of rough spots at the exit of turn two and the middle of turns three and four.

“He had a good car all night. We could make runs on him and we’d get under him, but would hit a rut and bobble a little bit and he’d pull us. Then he’d hit a rut and we’d catch him so we really had to equal cars,” Owens said.

Francis earned the race’s hard charger award with his run to the front. He was catching the two leaders and looking to make a move for the win before the caution slowed his run.

Notes: The winner’s Roush Yates-powered Barry Wright Race Car is sponsored by Crawford Supply, Klotz Synethetic Lubricants, Mark Martin Chevrolet, Cometic Gaskets and Boater Sports. ... The victory is Landers' fourth overall in the Late Model division and third on the Lucas Oil tour. His previous Lucas Oil victories came at Batesville (Ark.) Motor Speedway in 2010 and Tazewell (Tenn.) Speedway in 2011. ... The race took just over 15 minutes to complete. ... Landers toped qualifying for the second consecutive night. He also earned fast time honors in the tour’s event Friday at Jackson Motor Speedway in Byram, Miss. ... Don O’Neal of Martinsville, Ind., entered Saturday’s event with two consecutive victories on the tour, but ended up 13th after bringing out the race's only caution with a flat tire. ... The Lucas Oil Series takes a week off before returning to action April 13-14 at Bill Sawyer's Virginia Motor Speedway in Jamaica, Va., for the $25,000-to-win Commonwealth 100.