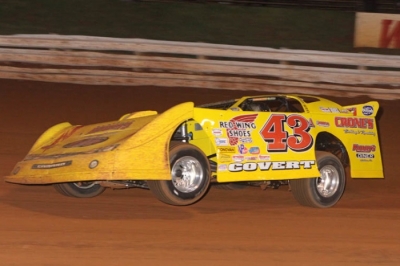 Covert's victory came just ahead of Greg Hodnett's flag-to-flag victory in the sprint feature, which just preceded rain that his the half-mile track in its second weekend of action for 2012.

Covert, who started on the front row, was never heeded on his way to the checkers. However the race for second was a good one between polesitter Jeremy Miller of Gettysburg, Pa., and third-starting Nick Dickson of Lewiston, Pa.

Dickson secured the spot with 14 laps down only to see Miller reclaim it two circuits later and then holding on to the finish. Covert entered lapped traffic on the 14th lap and worked it the remaining distance of the non-stop affair.

“This is my favorite place in the world,” Covert said in victory lane. “It means more to me to win here than pretty much anywhere.”

Notes: Covert's Rocket Chassis is powered by a Hershey's Racing Engine and sponsored by Red Wing Shoes, Crone's Building & Remodeling and Pre-Mach Inc. ... The victory was Covert's 44th victory in the No. 43A owned by Barry Klinedinst. ... Williams Grove begins its regular Limited Late Model division on April 21.