Moyer's bid for third Illini 100 off to impressive start 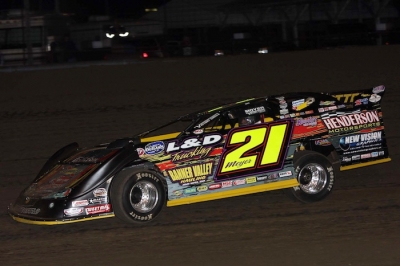 The 54-year-old dirt Late Model legend was the evening’s fastest time-trialer and won the first of six 15-lap heat races, once again stamping him as the favorite to take home the 100-lap World of Outlaws Late Model Series $20,000 top prize Saturday night. He is undefeated in two career Illini 100 appearances, winning the 2008 and 2010 events. | Video | Slideshow

“We’re not done yet, but it’s a good start,” said Moyer, who also set fast time for the inaugural Illini 100 in 2008. “The car felt good. It needs some adjustments, but being in the first heat, the track hadn’t really gone either way yet. We got some decisions to make about what we think it will do tomorrow.”

Moyer will start his Victory Circle No. 21 machine from a spot in the first three rows of Saturday night’s Illini 100, which is returning to the quarter-mile Farmer City oval after a year’s hiatus. He will redraw for the top six spots with Friday’s other heat winners: Vic Coffey of Caledonia, N.Y., Jimmy Mars of Menomonie, Wis., Shannon Babb of Moweaqua, Ill., Darrell Lanigan of Union, Ky., and Brian Shirley of Chatham, Ill.

Saturday night’s headliner could shape up as the third installment of a historic Moyer-Babb battle. Moyer held off Babb’s furious late-race charges to record both of his Illini 100 wins and knows the Land of Lincoln star will be gunning for him.

“I’m sure he’ll be one of the guys there at the end,” Moyer said of the 38-year-old Babb, who owns two runner-up and a fifth-place finish in three Illini 100 starts. “He gets around this place as well as anybody. He’ll be doing everything he can to win.

“If he does,” Moyer quipped, “at least he’s in one of my cars (a Victory Circle Chassis) this time.”

Moyer sees another typically hard-fought Illini 100 in the offing.

“I hope I don’t have to work as hard as I did in those other (Illini 100) — the fans like exciting races like that, but I sure don’t. We’ll just have to see where we draw and hopefully by the end we’ll be in position to make something happen.”

Moyer bested a 53-car field in Ohlins Shocks time trials, turning a lap of 13.307 seconds. The largest qualifying night crowd in the history of the Illini 100 packed the stands on Friday, setting the stage for a record-breaking evening on Saturday.

Saturday’s program, which begins with hot laps at 5 p.m., features consolation races and the Illini 100. The UMP modifieds will also run consolations and 50-lap, $5,000-to-win feature, and the track’s regular Crate Late Model and street stock classes will be in competition.