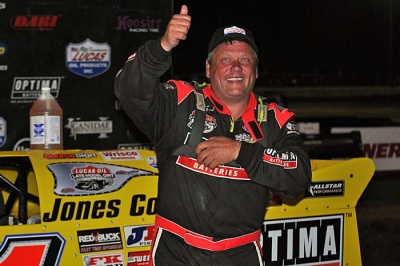 BYRAM, Miss. (March 30) — Much like he did the previous week at Brownstown Speedway, Don O’Neal trailed a dominant Jimmy Owens through the first half of Friday’s Southern 50 at Jackson Motor Speedway seemingly headed for a second-place finish.

And much like he did at Brownstown, O’Neal turned up the wick during the second half of Jackson’s Lucas Oil Late Model Dirt Series feature and overtook a fading Owens en route to his second consecutive $10,000 victory on the national tour. | Video | Slideshow

After falling as far as straightaway behind Owens during a 24-lap green-flag run to open the race, the third-starting O’Neal of Martinsville, Ind., capitalized on a slip up by Owens of Newport, Tenn., to take the lead on lap 38 and pulled away during the remaining distance.

“I didn’t think anybody was gonna come close to him, cause that guy drove off and nobody could even run with him,” O’Neal said of Owens’ impressive first-half performance. “But when we had to get married to that bottom (groove) toward the end of the race he got to struggling some.”

The victory is O’Neal’s fourth in eight races for the Lucas Oil tour this season. After winning five races all year on his way to a third-place points finish in 2011, O’Neal is confident he and his MasterSbilt Race Cars house car team are capable of contending for his first national title this season.

“We just gotta keep things rolling like they are,” said O’Neal, who jumped from fifth to second behind Owens in the standings following Friday’s race. “Even if Jimmy would’ve won tonight we just had to make sure we finished up there in the top two or three. That’s what it takes to win this deal. We’ve still got a long way to go, but we’re doing a pretty good job so far of staying close to the front.”

While Owens struggled as the quarter-mile oval’s bottom groove became dominant midway through the race, O’Neal kept getting better. He first looked under Owens on the lap-24 restart, but was soon preoccupied with holding off a strong challenge from Landers.

After running side-by-side for six laps, O’Neal finally dispatched Landers following a lap-30 restart and began to apply heavy pressure to Owens through a series of cautions. O’Neal stuck with Owens following a lap-35 restart and pulled alongside when Owens slid high exiting turn two on lap 38. O’Neal completed the winning pass at the other end of the racetrack as the two made contact in turn four.

“He messed up there in one and two and slid up and I got a good run on him down the back,” O’Neal said. “He gave me just enough room down there in three and four. It was tight and we rubbed a little bit, but in situation like that when it’s that hard to pass I didn’t have much choice.”

Owens moved to the high side after losing the top spot, but it was a wasted effort as O’Neal cruised in the track’s low groove. Owens remains winless on the season, but now has three runner-up finishes in Lucas Oil Series action.

“It’s just a little bit of me fading and him getting faster. He’s been really fast and tonight we just had a little bit too hard of a tire on,” said Owens, who took over the series point lead with Friday’s effort. “We were good at first. Those first couple cautions didn’t hurt me, but when they kept on and kept on, it was getting worse and really slowing down.

“It’s definitely a little disappointing when it goes this way. We’d rather come from the back and finish second than lead the race and not finish it up.”

Reddick was quiet while running outside of the top five for much of the race, but the young driver made it count when it mattered the most, rallying in the closing laps to finish third and equal his best performance of the season.

“It was all about hugging the bottom and not making a mistake,” Reddick said. “The only way you could go forward was not make any mistakes and take advantage when someone ahead of you slipped up. I was really just riding, so starting seventh and finishing third’s a pretty good finish.”

Landers was one of the few drivers to make the track’s high line work, nearly overtaking O’Neal for second midway through the race. But he never could get the groove working quite good enough and faded late while brushing the wall on multiple occasions.

The fifth-starting Wallace ran as high as third before dropping back to fifth at the finish. His solid performance came in just his second race after switching to a Barry Wright Race Car.

Home-state driver Klint Byars of Carrollton, was in position to claim his best Lucas Oil Series finish after advancing from sixth to third, but he spun to cause the lap-44 caution while looking under Owens for second.

Notes: O'Neal's Jay Dickens-powered MasterSbilt is sponsored by Optima Batteries, Independence Lumber, Seubert Calf Ranches, Super Cleaning, Jones Core and Budda Bert Transmissions. ... Contested in front of a near-capacity crowd that set an attendance record for Jackson, the race was slowed by six cautions with O’Neal’s winning pass marking the only lead change. ... The event was the Lucas Oil tour’s first visit to Jackson, and it was Jackson’s biggest race in nearly a decade. ... Dennis Erb Jr. of Carpentersville, Ill., entered the event with the points lead, but finished 14th after starting from the tail of the field in a backup car. ... Steve Francis of Ashland, Ky., was battling Landers for the lead during the first heat race before spinning as the two drivers ran side by side. Francis spun again during the main event, but rallied from the tail of the field to finish eighth. ... Three-time series champion Scott Bloomquist of Mooresburg, Tenn., was the first car out of the feature after using a provisional to make the lineup for the second straight week. ... The Lucas Oil tour moves to Lone Star Speedway in Kilgore, Texas, Saturday night for another $10,000-to-win race.