Looney holds off Vaught for $3,000 at Springfield 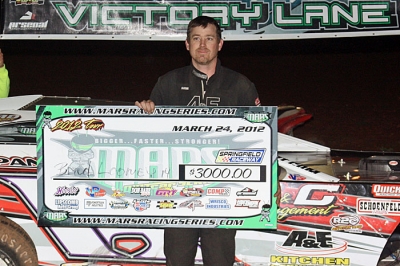 The eighth-starting Vaught moved by Tony Jackson Jr. of Lebanon, Mo., on a late restart for the second spot, but settled for the runner-up finish after his late rally fell just short. Jackson, who captured his first MARS victory in the tour’s opener at Clarksville (Tenn.) Speedway on March 2, was third at the finish after challenging Looney during the middle stages of the 40-lap race.

Hometown driver Terry Phillips, who has eight championships between the MARS and MLRA tours, was fourth at finish after starting seventh while Jesse Stovall of Galena, Mo., who was plagued by multiple issues in his heat race, passed 13 cars to finish fifth and earn the race’s hard charger award.

Notes: Looney's Hatfield-powered Victory Circle Chassis is sponsored by Family Pharmacy, Federal Protection Inc., C&C Management and Republic Glass. ... The victory is Looney’s fifth on both tours. ... Looney earned the pole starting position thanks to a made three-point shot in a basketball shooting contest among the six drivers who earned the most passing points during the night’s heat races. ... Stovall, who drove a Fred Bishop-owned car to a career-high $10,000 victory last weekend at ArkLaTex Speedway in Vivian, La., was in an Al Humphrey-owned entry at Springfield. ... The MARS Series returns to action April 6 with a $5,555-to-win event at Thunderbird Speedway in Muskogee, Okla., while the MLRA’s next race is a $3,000-to-win event April 7 at I-80 Speedway in Greenwood, Neb.