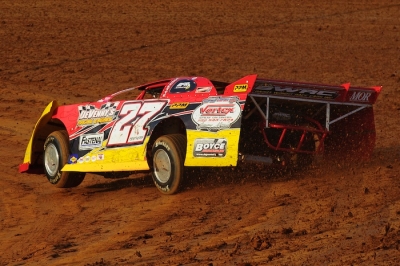 Bo Feathers won't forget the first time his son Trever climbed into a Dirt Late Model. Bo and Trever's grandfather, Wayne, took the youngster to Maryland's Potomac Speedway for his first practice session, and the 15-year-old Trever struggled to maneuver through the pit area with the Late Model's unorthodox clutch. | Slideshow

But once Trever reached the racing surface, there was no such clumsiness. Just a lot of throttle-stomping. Soon enough, Trever was clicking off high-speed laps, running dangerously close to the outside wall. When Trever drove back to the pits, Bo Feathers suggested to his son to perhaps take it a little easier, getting more experience before teasing the concrete barrier.

" 'Dad,' he said, 'That's where you race. Why can't I?' I said, 'Oh Lord,' " Bo Feathers recalls, who has since watched his son develop into a successful Limited Late Model driver. "From then on ... he can go to a racetrack, and his main objective is if he can hold it wide open all the way around the racetrack. He's got ice water running through his veins."

This weekend Trever will head to his hometown track Winchester (Va.) Speedway for his first practice session for 2012, and the 19-year-old driver is moving up to join his father in the Super Late Model division.

The younger Feathers has 15 Limited Late Model victories over the past three seasons, along with the 2010 Limited Late Model championship at the 3/8-mile Winchester oval. He's made a few Super Late Model starts in his dad's car, but he's looking forward to the challenge of a full season — and perhaps some victories — in the elite division.

"I told everybody in the garage, we've got a big learning curve coming, but you never know," Trever said. "I've seen crazier stuff in racing."

He enters the 2012 on a nice roll. After struggling in the first half of 2011 with an older Barry Wright Race Car, winning a single race, Trever upgraded to a new BWRC and blossomed in the second half of the season. He clicked off five victories in his last eight starts, including wins at Winchester, Natural Bridge (Va.) Speedway and Hagerstown (Md.) Speedway's Small Car Nationals.

He's especially proud of the victories away from his hometown track. "Those wins mean a lot," said Trever, who plans to attend Shenandoah University next year to study pharmacy. "When you go to somebody else's turf and win, that means a lot."

Trever even had some off-track momentum during the off-season, participating in a Winchester slot-car league where dirt racing enthusiasts compete using 1/24-scale Dirt Late Models in slot-track builder Tim Hottle's garage. Trever won three out of the last four races of the season, including the Lucas Oil-sponsored Slot Car World Championship, and he says using the trigger for the slot car around the dirt-track lookalike indoor oval isn't too different than feathering the accelerator in a race car.

"Except you're using your finger instead of your foot," he says.

Now he moves back to the full-size cars and the Super Late Model division, anxious to battle in one of the toughest Dirt Late Model regions in the country with Winchester and nearby Hagerstown hosting strong weekly competitors. In two Super Late Model starts last year, he barely missed transferring to an Appalachian Mountain Speedweek main event, then posted the 11th quickest qualifying time at Winchester's Raye Vest Memorial, finishing 15th in the feature.

Bo Feathers, himself an accomplished racer with track championships and 100 career feature victories, is impressed with his son, who has always had a competitive streak.

"He's far exceeded anything I ever envisions he'd be able to do. When it comes to anything competitive, video games, anything he does, he's gotta be first. He's gotta be No. 1," the elder Feathers said. "I wish I had the money to take him out and race."

Trever remembers as a youngster his parents being coy about whether he'd be able to become a racer, and he says now that he suspects the reason his mother Lisa doesn't come to the races anymore is because she's a little fearful of watching her boy race. But he's definitely become a racer, just like Bo Feathers knew he would the first time he saw him in the car.

"I knew what was going to happen — and it happened," Bo Feathers said. "It's worse than drugs. You get addicted to that adrenaline rush, and you want to do it the rest of your life."

"He has an ability to just ride, but when he needs to go, then he goes. It's crazy to watch him race," Bo said. In Limited Late Models, "he had just like a sixth sense to him to figure out where he needs to go and what he needs to do before he even gets there. He's like he's been racing for 20 years, and he's only got three seasons under his belt.

"I've gotten to the point where I don't even want to race because it's exciting to watch him. ... It's pretty cool to have a kid who can do that."

Besides competing at Winchester, Hagerstown and other regional tracks, Bo Feathers said he plans to take Trever to Virginia Motor Speedway in Jamaica, Va., next month for the $25,000-to-win Commonwealth 100, a Lucas Oil Late Model Dirt Series event that will draw many of the sport's national stars. It'll be a good experience for the teen.

"If his balloon has been inflated too much," Bo Feathers said, "it'll get deflated real quick."