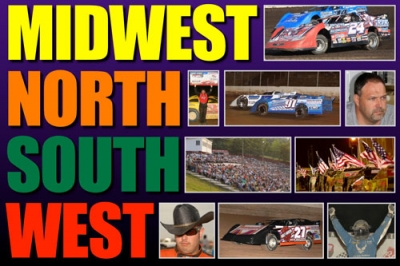 With the national tours getting their wheels on the ground during Florida Speedweeks, the regional Dirt Late Model series are starting to crank up. Some have already kicked off while others have debuts coming up in the second half of March. DirtonDirt.com checks in with virtually every series throughout the country to see who's traveling to new tracks, who's instituting new rules and who's making changes with purses. Check out complete capsules for each series for the North, South, Midwest and West with these links, and get a preview below of regional highlights:

The American Dirt Racing Association plans a 10-race schedule including Brushcreek's Billy Bob Classic. ... The Appalachian Mountain Speedweek has a new title sponsor in Harbaugh Amusement as the tour tries to draw 100 drivers for the fourth straight year. ... The Northern Tier United Late Model Series wraps up the season with a pair of lucrative events at McKean County Raceway and Hesston Speedway. ... The All Star Championship Series (which lost O'Reilly Auto Parts sponsorship last season) plans to have its events telecast on Sportstime Ohio. ... The Steel Block Bandits switches to a 358 c.i. engine rule. ... The Three State Flyers hopes to add more races to initial 10-race schedule.

The first-year Battle of the Eastern All Stars Tour tries to carve out space in the Carolinas. ... The Carolina Clash Super Late Model Series has its fewest races in the tour's 12-year history. ... The Arkansas-based Comp Cams Super Dirt Series plans its biggest races to wrap up the season. ... The Mississippi State Championship Challenge Series is wide open for a potential new champion. ... The Ray Cook-promoted Schaeffer Oil Southern Nationals Series is offering $500 bonuses to best drivers of each week through sponsorship from Old Man's Garage. ... The Southern All Star Series institutes a $3,500-to-win purse structure and takes its engine rules back to 2004. ... The Southern Regional Racing Series hits 10 racetracks for 21 races, including six-race stretch from June 28-July 3. ... The Southern United Professional Racing, without O'Reilly Auto Parts for the first time in 13 years, splits 16 of its races among four stalwart tracks. ... The Ultimate Super Late Model Series forges ahead without any races at Cherokee Speedway. ... The United Dirt Late Model Challenge Series is off to a slow start with car count, but lucrative Bubba Raceway Park events could help boost the Florida-based tour.