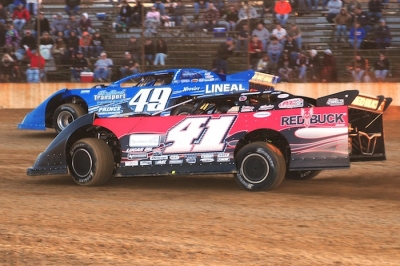 Neat, whose only other victory at Brownstown came in 2005 in a race for non-winners, outdueled Greg Johnson of Bedford, Ind., in the second half of the race for the victory.

“It’s great to win here at Brownstown; it’s been a while," said the 32-year-old Neat. "The track was great tonight, if it is like this for the (March 24 Indiana) Icebreaker the fans are going to see some great racing.

"I borrowed a couple of my brother Dustin’s crew to come up here tonight, we will be back here in two weeks with a brand new MasterSbilt Race Car and maybe we’ll end up right back here in victory lane.”

Johnson barely held onto the second spot at the checkers over third-place finisher Justin Rattliff of Campbellsville, Ky., while Jeremy Hines of Seymour, Ind., and Joe Janowski of Carmel, Ind., rounded out the top five. Polesitter Kent Robinson of Bloomington, Ind., was sixth.

Rattliff took command at the outset to lead the first five laps with pressure from Johnson, who took command on a lap-six restart. Rattliff slipped back along with Neat, who held the third spot early but dropped out of the front pack.

Johnson led Robinson over the next seven laps while Neat worked his way back toward the front, taking the second spot on lap 15.

Neat pulled alongside Johnson for a side-by-side battle before clearing Johnson. A lap-20 caution set up a five-lap dash to the finish, but Neat edged away to take the checkers alone.