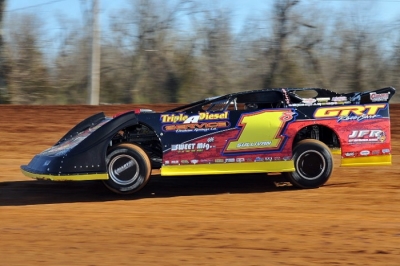 SPRINGFIELD, Mo. (March 10) — Leading all 30 laps from outside the front row, Jack Sullivan of Greenbrier, Ark., earned $2,000 on Saturday at Springfield Raceway in the unsanctioned Turkey Classic. The weather-postponed from November marked the season opener at the quarter-mile track.

Sullivan's victory was his second in a row after earning $3,500 eight days earlier at Texas Motor Speedway in the Southern United Professional Racing tour opener. He jumped to the lead at the outset over Jesse Stovall of Galena, Mo., with Phillips, Wells and Mooneyham in pursuit.

The leader quickly built a half-straightaway advantage while his pursuers mixed it up behind him. A lap-four yellow for Eric Tinderholt bunched the field and Sullivan pulled away again.

Brad Looney slowed on the backstretch for a lap-nine caution, and Sullivan resumed command while Wells took the second spot from Stovall.

Sullivan worked lapped traffic in the second half of the race and the frontrunners were battling the slower traffic on lap 23. Stovall lost the third spot when he got collected in a turn-two tangle, ending his race.

A final yellow appeared when Brandon McCormick pulled up lame on the restart, and Sullivan closed everyone out over the final seven laps to win a race that saw 14 of 20 starters finish on the lead lap.