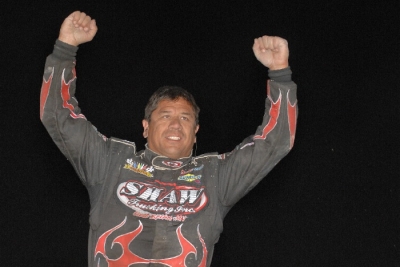 "My setup going into the feature was set up for the high side," said Shaw, who complimented the LVMS track prep. "I had it as loose as I could be and as long as I stayed out of the berm and held it wide open, I was good."

Clay Daly of Watsonville, Calif., nipped polesitter Jason Papich of Arroyo Grande, Calif., for third on the final lap and A.J. Kirkpatrick of Castroville, Calif., rounded out the top five.

Papich and Thornton battled side-by-side for the lead the first four laps while Shaw quickly worked up to third from his fourth-row starting spot, using the low side of the track.

Shaw dropped Thornton to third on the fifth lap, then swapped the lead with Papich for a few laps before taking command for good on lap 10. With Shaw edging away, Papich and Thornton battled before the runner-up spot.

Devin Crockett spun in front of Shaw — with no contact — midway through the race, the first in a stretch of seven yellow flags over the next nine laps.

Another yellow appeared on the restart when polesitter Jason Papich spun his tires on the restart, stacking up the field and knocking Crockett, Garrett Alberson and Trevor Glaser out of action.

Sixth-running Mike Johnson, who started 14th, spun in turn two on the 18th lap while running the cushion. Heat winner Steve Drake hit the backstretch wall on the 20th lap for a yellow and a slowing Mike Kirby (lap 23) and spinning Rob Mayea (lap 24) also drew cautions. The final yellow appeared when Rob Sanders and Mike Balcaen made contact in turn one on the lap-24 restart.

Notes: Shaw's Rocket Chassis has a Pro Power engine and sponsorship from Shaw Trucking, First Impression Lawn Sprinklers, Blaine Brothers Towing, Trent Signs, Lube Tech and West Bay Leasing. ... Shaw said he tested last weekend at Arizona Speedway in Apache Junction, helping him make improvements since January's Wild West Shootout in Tucson that paid off at Vegas. ... Eleven of 20 starters were running at the finish of the feature. ... LVMS added 700 truckloads of clay to the track in the off-season; the surface was smoothy and racy. ... The 31-car field represented seven states and Canada. ... Phoenix-area teammates Joey Moriarty and Ricky Thornton Jr. won their heat races from the pole position. ... Mike Johnson was leading the first heat when he got sideways in turn three, handing the lead to Jason Papich, who in turn lost the lead to winner Steve Drake. ... Shaw won his heat race by more than a half-track margin. ... A.J. Kirkpatrick of Castroville, Calif., was making his first start since 2009 at Las Vegas. ... Dan Shepherd and Tommy Malcolm tangled on the backstretch early in the second heat, drawing a red flag and ending Malcolm's night. ... That wreck also collected Colorado driver Terry Boushee, who returned to racing for the first time since undergoing back surgery. ... Mike Balcaen of Winnipeg, Manitoba, transferred to the main even through the consolation race despite right-rear damage the final six laps. ... Drivers failing to make the feature: Shepherd, Malcolm, Boushee, Ron Bartels, Randy Shafer, Jason Schierkolk, Shane Simper, Zack Forster, Dave Deetz, Andy Obertello and Dino Napier, whose car broke down in the consolation. ... Forster was driving the backup car of Rob Sanders. ... IMCA modifieds were also on the card with Randy Brown of Chowchilla, Calif., leading the final two laps after stealing the lead from Ricky Alvarado. Paul Stone led the first 15 laps before Alvarado took over. ... Next up for the West Coast Shootout is the Gary Jacob Memorial on March 31 at Giant Chevrolet Speedway in Hanford, Calif. ... CLMA drivers participate in the co-sanctioned Sunflower Showdown on April 27-28 at the Great American Dirt Track in Jetmore, Kan.