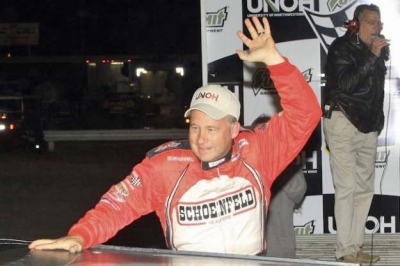 1: Alligator captured on the Volusia grounds; the nearly 5-foot creature was picked up by animal control.

3: Victories by Steve Francis, the most by any driver.

6: Flip or rollover accidents with Tim Fuller and Mike Collins getting upside down at Ocala while John Lowrey, Ryan Unzicker and Larry Wright went over at Volusia. Royce Bray got upside down during time trials at Screven Motor Speedway. None were seriously injured.

8: Top-five finishes for Steve Francis and Dennis Erb Jr., most of any Speedweeks entrant.

9: Days that Josh Richards was alone atop the World of Outlaws all-time victories list after winning at Ocala victory Feb. 17 before Billy Moyer pulled back even with his Feb. 26 victory at Volusia.

11: Cars that pitted for fresh right-rear tires under a lap-27 caution during the East Bay finale Feb. 18. It was a rare case of planned pit stops in a Dirt Late Model race.

13: Feature starts for Dennis Erb Jr., most of any Speedweeks driver and a perfect 13-for-13 at three tracks.

15: Cars that were involved in or received damage from a lap-37 pileup during East Bay's finale. The turn-two wreck was spurred by contact between Randy Korte and John Blankenship, who were battling among the top five at the time.

18: Complete race programs contested, the most since 2008.

21: Entries at Waycross, fewest of any Speedweeks event.

24: States represented by Speedweeks drivers, not including Canadians Don Gordon, Jim Fletcher and Charlie Sandercock, all of Ontario.

35: Years that statistician Jean Lynch as been at East Bay's Winternationals before missing this year's event while recovering from injuries sustained in a highway accident last summer.

41: The average age of Georgia-Florida Speedweeks winners during a stretch when half of the winners were 44 years old or older.

79: Entries for the Feb. 17 World of Outlaws event at Volusia, the highest Speedweeks car count.

147: Total drivers to enter at least one Georgia-Florida Speedweeks event, 10 more than last season. The all-time record was 175 drivers in 2004.

50,700: Dollars earned at Speedweeks by Lanigan, the most by any driver.