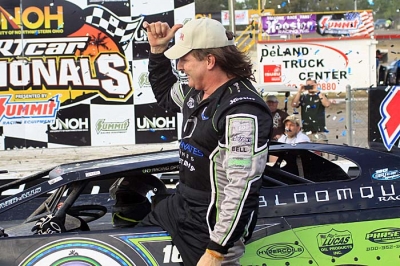 Scott Bloomquist picked up his first win of the season in Volusia's day race. (stlracing.com)

In an event pushed to Friday afternoon following a rainout on Wednesday night, Bloomquist took advantage of starting from the pole position to lead the entire feature distance. He was never seriously challenged en route to a $7,000 triumph. | Complete Speedweeks coverage

The 48-year-old dirt Late Model legend scored a runner-up finish in Thursday evening’s World of Outlaws Late Model Series 50-lapper that was contested on a heavy, physical track surface, but on Friday a surface baked hard by the Florida sun allowed him to cruise to the checkered flag.

“Talk about night and day – that’s what this was,” said Bloomquist, comparing the Thursday night and Friday afternoon programs. “We really didn’t have to change much on the race car though, just a couple small things. The (Team Zero by Bloomquist) car is very versatile, and the (Roush-Yates) engine is just awesome.”

Bloomquist owed much of his winning effort to his qualifying performance. With the four fastest drivers in each of six group qualifying sessions inverted for heat-race action, Bloomquist turned in a lap that was placed him on the pole for his preliminary. He won the heat with ease and then picked the number one starting slot for the feature, propelling him to Victory Lane.

“It’s tough to come from behind, especially in a day race like this,” said Bloomquist, who recorded his fifth win since 2003 at Volusia but just his second in UMP-sanctioned competition (his most recent wins – one in ’04 and two in ’11 – came under the WoO LMS banner). “So definitely, starting from the pole was important.

“This is the first time (he ran an afternoon event at Volusia), so we really weren’t sure what to expect,” he added. “I tried to take it easy on the tires. It looks like we used ‘em up pretty good, but didn’t blister them. The car was good neutral.”

Bloomquist drove away from the pack after the race’s two caution flags, on the opening lap for a multi-car tangle in turn one that eliminated Thursday-night WoO winner Dennis Erb Jr. of Carpentersville, Ill., and Austin Hubbard of Seaford, Del., and on lap 10 for the stopped car driven by Tuesday-night UMP Late Model victor Billy Moyer of Batesville, Ark.

Dennis ‘Rambo’ Franklin of Gaffney, S.C., finished a distant second, 5.960 seconds behind Bloomquist in the AES Racing Barry Wright car. The veteran racer, who started third, passed outside-polesitter Clint Smith of Senoia, Ga., for second on lap one and maintained the spot to register a career-best outing at Volusia.

Rounding out the top 10 was Morgan Bagley of Longview, Texas; Jonathan Davenport of Blairsville, Ga., who fought forward from the 10th starting spot; DIRTcar Big-Block standout Billy Decker of Unadilla, N.Y., who slipped to eighth after taking the green flag from the fourth spot; Don O’Neal of Martinsville, Ind.; and Jim Yoder of Selinsgrove, Pa.

Rick Eckert led every lap in winning the final consolation race over Frank Heckenast Jr. They'll both make the main event lineup. The race's only caution came with four laps complete when Jill George, Phil Ausra and Duane Harbough piled up in turn one.

Mason Zeigler cruised to victory in the first of three consolation races while John Blankenship topped Greg Johnson for the final transfer spot in the eight-lapper. A large number of drivers scratched from the lineup.

Still looking for his first 2012 Speedweeks victory, Scott Bloomquist will start from the pole of today's feature after a redraw among heat race winners. Clint Smith will join Bloomquist up front, while Dennis Franklin and Billy Decker will share row two. Donnie Moran and Morgan Bagley will start fifth and sixth. ... The race has has been shortened to 25 laps.

Polesitter Dennis Franklin dominated the final heat, pulling to more than a straightaway advantage over runner-up Jason Feger during the caution-free race. Gregg Satterlee pulled alongside Bobby Pierce for third at the white flag, but Pierce closed the door in turn two, nearly squeezing Satterlee into the wall. Piece continued on to claim the final transfer spot, while Satterlee slid back to fifth from the incident.

Clint Smith cruised to the win in the fifth heat, leading every lap after taking the lead over Austin Hubbard on the start. Hubbard was a distant second at the finish while Brady Smith held off Rick Eckert to claim the third and final transfer position. Jill George nearly pulled off the day's first high-side pass during a battle with Tim Lance back in the pack, but she lost momentum when she got loose exiting turn four. Another turn-one scramble on the opening lap caused Jared Hawkins to hit the inside wall, sending him to the pit area.

Polesitter Billy Decker moved to the lead on the start and held off third-starting Jonathan Davenport for the win. Davenport settled for second and will transfer to feature along with third-place finisher Lance Matthees. The race took three attempts to get started. Eric Jacobsen slowed on the first start to bring out the caution while Todd Frank and Steve Isenberg tangled on the next attempt. The race's other caution came with five laps complete when Steve Isenberg spun in turn four directly in front of Eric Jacobsen.

Polesitter Mogan Bagley grabbed the lead on the start and pulled to a comfortable advantage to topping Don O'Neal and Billy Moyer at the finish. O'Neal challenged Bagley on the opening lap, but fell back through the remainder of the race in finishing second. Moyer held off Billy Ogle Jr. to grab the final transfer spot. A battle to get to the preferred bottom line caused a five-car pileup on the first attempted start when O'Neal and JImmy Owens tangled in turn two. Owens and Pat Doar went to the pit area, while the others involved continued for the complete restart.

Second-starting Donnie Moran moved to the lead on the start of the race and led every lap to take the win. Jim Yoder and polesitter Dan Stone finished second and third to also transfer to the feature. The race's only caution came on the opening lap when Charlier Sandercock got into the back of Jimmy Mars in the middle of turns one and two, knocking both cars out of the race. Mars was the group's fast qualifer.

Polesitter Scott Bloomquist beat fellow front-row starter Josh Richards in a race to get to the bottom of turn one and on the start of the eight-lap prelim and led a every lap for the victory. Richards turned back a challenge from Dennis Erb Jr. on a mid-race restart and claimed the runner-up finish. Erb, the group's fast qualifier, finished third after starting fourth and will also make the main event. John Blankenship moved to second early in the race, but slipped up out of the groove, allowing Richards and Erb to move by.

Rick Eckert of York, Pa., was the fastest of 61 qualifiers at Volusia Speedway Park Friday afternoon during time trials for the UNOH DIRTcar Nationals Presented by Summit Racing Equipment event that was postponed from Wednesday.

Eckert posted a lap of 16.435 seconds around the half-mile track to top the last of six qualifying groups. He’ll start fourth in his heat race coming up after an inversion of the top four drivers in each qualifying group. Other group fast timers: Thursday’s winner Dennis Erb Jr. of Carpentersville, Ill.; Jimmy Mars of Menomonie, Wis.; Brandon Sheppard of New Berlin, Ill.; Dillon Wood of New Smyrna Beach, Fla.; and Jimmy Owens of Newport, Tenn.

The top three finishers from each eight-lap heat will transfer to the $7,000-to-win main event with the six heat winners redrawing to determine their starting order. Three consolation races will each transfer two drivers, while a UMP provisional starter will round out the 25-car starting field.

Top four will invert for heat races by group