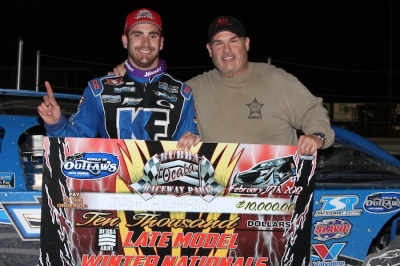 The polesitting Richards, who took the lead from fellow front-row starter Lanigan on the 26th lap, earned $10,000 in the second round of the Bubba Army Winter Nationals at the 3/8-mile oval. He also become the winningest driver in World of Outlaws history with his 38th victory, breaking a tie with Billy Moyer of Batesville, Ark., who finished fourth.

Lanigan, who has victories each of the last three seasons at Ocala, couldn't stay within striking distance in the final laps and settled for second. Bub McCool of Vicksburg, Miss., rallied from his 13th starting spot to finish third while Moyer and Mike Marlar of Winfield, Tenn., rounded out the top five.

Shane Clanton of Fayetteville, Ga., ran among the leaders most of the way but got too high in turn two running second on the 40th lap, flattening his right-rear tire and knocking him from contention.

The feature was slowed by four cautions, the most serious incident when Ron Davies and Dan Stone got tangled up on the inside of the backstretch after 36 laps. Other cautions appeared on the 16th lap for a slowing Davies, lap 32 when Ivedent Lloyd Jr.'s smoking car slowed and pulled pitside and lap 40 for Clanton.

Polesitter Vic Coffey and fellow front-row starter Billy Moyer pulled away with Coffey in control most of the way, but Moyer nudged underneath in turn four heading for the white flag and took the victory. Coffey settled for second while Billy Moyer Jr. held onto third to get a transfer spot that was up for grabs most of the way. Frank Heckenast Jr., Dan Stone and Kevin Weaver all looked liked they could take a shot at Moyer Jr., but none could get the job done in the caution-free affair.

Jason Feger, who got too high and nearly into trouble on the first lap, took the lead on the second lap when polesitter Ron Davies himself got too high in turns one and two. Feger and Davies made it a two-car breakaway until a lap-eight caution for debris on the backstretch. Feger held on the final two laps while Davies held onto second. Clint Smith got the third and final transfer spot ahead of sixth-starting Jack Sullivan. Fourth-starting Austin Kirkpatrick lost ground on Feger's first-lap miscue and never recovered.

Polesitter Shane Clanton became the third straight repeat heat winner, cruising to victory. Outside front-row starter Rick Eckert slipped back to third early. but retook the second spot from Bub McCool before halfway and held on. McCool got the third and final transfer spot, finishing far ahead of Jason McBride. Fifth-starting Casey Roberts contended for a transfer spot early but faded. The red flag appeared after Mike Collins got into the backstretch wall on the second lap and barrel-rolled into turn three; he wasn't injured and made a long walk to the pits, acknowledging applause from the crowd. Two wreckers were required to remove the wrecked car.

Polesitter Josh Richards cruised to victory, matching Darrell Lanigan with his second straight heat victory at Ocala. Mike Marlar got the second spot, rebuffing a few challenges including one from Ivedent Lloyd Jr. on lap-three restart. The hometowner Lloyd got the third and final transfer spot, finishing far ahead of Tyler Ivey. Third-starting Gregg Satterlee was running third on the third lap when he tried to dive under the second-running Marlar in turn four; Satterlee spun on the frontstretch and restarted on the tail.

Polesitter and Ocala dominator Darrell Lanigan cruised to a 10-lap victory to transfer to the main event along with Brandon Sheppard and Pat Doar. Doar, who started outside the front row, actually got the jump on Lanigan on the initial start, but a caution erased it. Dillon Wood was fourth after pressuring Doar the final five laps. The first two starts were scrapped, first when Chub Frank and Alan Fink tangled in turn four with the right rear of Fink's machine perched on the left rear of Frank's car; both were able to continue. On the second attempted start, Tim Lance spun into the turn three wall; his car was towed off the track.

Maintaining his momentum after a victory in Thursday's opener, Darrell Lanigan of Union, Ky., topped 51 qualifiers Friday in the second round of the Bubba Army Winter National.

Lanigan turned a lap of 13.938 seconds to lower the track record at the reconfigured and rebanked 3/8-mile trioval. Josh Richards of Shinnston, W.Va., set the record last night at 13.994 seconds.

Lanigan will start on the pole of the first of five World of Outlaws Late Model Series heat races. Other heat race polesitters: Richards; Shane Clanton of Fayetteville, Ga.; Ron Davies of Warren, Pa.; and Vic Coffey of Caledonia, N.Y.

Five 10-lap heats are on the schedule followed by a pair of 12-lap consolation races. The night's 50-lap feature pays $10,000 to the winner. Three drivers apiece transfer from heat races and four apiece in consolations.

Brandon Sheppard broke a right-rear wheel after posting a solid qualifying time, causing enough damage to the car to require a tow to the pits. ... Kent Robinson got into the turn-two wall in time trials and didn't get a time; he had a broken right rear axle tube. ... Steve Shaver also got into the turn-two wall and suffered right-front damage. ... Jared Hawkins pulled off without a qualifying time; engine problems forced him into a backup car. ... Brian Shirley lost his qualifying time when officials rules the windows in his sailpanels were illegal. ... There were a few afternoon and early evening at sprinkles at Ocala, where there's been a chance of rain all day. ... Extra track prep delayed the start of hot laps more than an hour to 7:20 p.m. or so and it took a few hot-lap sessions to get the track ready for time trials. ... Lanigan is gunning to become the first driver to win three straight WoO events since Josh Richards last August. ... Scott Bloomquist won the first two WoO events of 2011, both at Volusia Speedway Park. ... Newcomers for Friday's action: Casey Roberts of Toccoa, Ga., and Frank Heckenast Jr. of Frankfort, Ill. ... Greg Johnson of Bedford, Ind., lost a pole position in a Thursday consolation race when he broke a driveshaft as he attempted to hit the track.