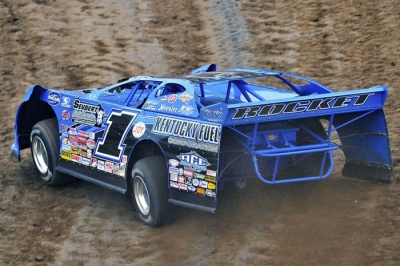 Josh Richards was tabbed as the favorite to win his third WoO crown. (thesportswire.net)

The verdict is in: if Josh Richards focuses on the 2012 World of Outlaws Late Model Series, he’s the favorite to win the national tour’s $100,000 championship. That’s the caveat to the fifth annual WoO Preseason Media Poll, which was topped by the sensational young talent from Shinnston, W.Va., for the fourth consecutive year.

Richards, 23, was voted the driver most likely to capture the 2012 World of Outlaws points crown just three months after it appeared he would not return to the series as a regular. He entered the off-season with expectations of moving to the NASCAR Camping World Truck Series in ’12 but a full-time ride has not yet materialized, prompting the press corps to view him as a solid bet to remain on the dirt in pursuit of his third career WoO points crown.

More than three dozen writers, photographers and broadcasters participated in the poll, which asked the press members to predict the top-five finishers in the tour’s 2012 points standings. Points were distributed to each driver named on the media ballots using a 5-4-3-2-1 system.

Richards tallied 170 points, buoyed by a poll-leading 22 first-place votes. His name appeared on 40 of the 43 ballots, with 37 of those selections listing him for a top-three finish in the points standings.

Last year Richards fell just short of capturing a third straight WoO championship, ceding the title to Rick Eckert of York, Pa., because of a heartbreaking flat tire on the final lap of the season-ending Lowes Foods World Finals at the Dirt Track at Charlotte in Concord, N.C. He will begin his bid for 2012 glory with his father Mark’s Rocket Chassis team this weekend in the $20,000-to-win Winter Freeze at Screven Motor Speedway in Sylvania, Ga.

Richards, who has been a WoO regular since winning the Rookie of the Year award in 2005, enters the 2012 season as the tour’s winningest driver since 2004, with 37 victories. He is tied with Billy Moyer of Batesville, Ark., for the circuit’s all-time victories record, including the earlier 1988-89 seasons.

While Richards’s primary objective since completing the 2011 campaign was securing a NASCAR Truck Series ride, his Kentucky Fuel Corporation/Seubert Calf Ranches-sponsored Dirt Late Model team continued its customary off-season preparation. The possibility of a NASCAR deal remains alive for Richards, but, if he fails to land in a truck seat for the complete schedule, he’s fully loaded to contend for the 2012 WoO title.

Tim McCreadie, 37, of Watertown, N.Y., finished second in the poll, trailing Richards by 11 points (170-159) in one of the closest votes in the poll’s history. The 2006 WoO champion was listed on 41 ballots, collecting 12 first-place (second behind Richards) and 17 second-place selections.

McCreadie, who finished a disappointing fourth in the 2011 points standings, enters the new season with renewed enthusiasm and confidence. He expects great results from his move to Warrior Race Cars, the Knoxville, Tenn.-based manufacturer that will work closely with McCreadie’s Sweeteners Plus team.

Eckert, 46, finished fourth in the poll with 111 points, but the defending WoO champion was the only driver listed on all 43 media ballots. He tallied a modest three first-place votes; the majority of his selections were for third place (12) and fourth place (20).

The top four drivers in the poll — who also occupied the top four positions in the final 2011 WoO points standings — dominated the voting. They were the only drivers to receive first-place selections, and no other driver appeared on more than 18 ballots.

Shane Clanton, 36, of Fayetteville, Ga., was a distant fifth in the poll, accumulating 32 points. Now racing for Kennedy Motorsports after ending his nine-year run driving for Ronnie Dobbins, Clanton was listed on 18 ballots, with three third-place selections his highlights.

Chub Frank, 50, of Bear Lake, Pa., who finished fifth in last year’s points standings but is winless on the WoO since August 2009, placed sixth in the poll with 18 points. He was named on 13 ballots, including one runner-up, one third-place and 11 fifth-place votes.

The surprise of the voting was Mike Marlar of Winfield, Tenn., an accomplished 33-year-old driver who hopes to follow the WoO for the first time in equipment fielded by Norman Bryson. He finished seventh in the poll on the strength of six fifth-place picks.

Richards ran away with the top-winner voting, receiving 28 votes. The only other drivers tapped for possible winningest-driver status in 2012 were McCreadie (eight), Eckert (three), Lanigan (three) and Frank (one).

Media members predicted that the season’s most prolific winner will lead the tour with as many as 14 victories and as few as three. The single-season win record for the WoO since 2004 — nine victories — is shared by Richards (2011) and Scott Bloomquist of Mooresburg, Tenn. (2004).

Richards also emerged as the favorite among the media to win all three major events listed, receiving 11 selections in each race’s balloting. He is the defending champion of the USA Nationals, but he hasn’t won the Firecracker 100 and has never captured a WoO event at Screven.