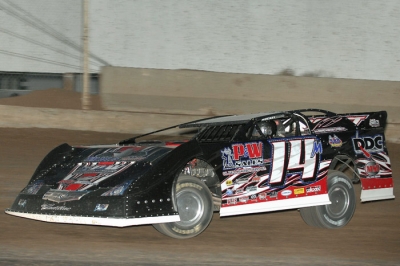 Morgan Bagley heads for a $10,000 victory in Tucson. (photofinishphotos.com)

Regaining the lead after miniseries dominator Billy Moyer dropped out on the 30th lap, Bagley held off Tim McCreadie of Watertown, N.Y., over the final 10 laps for a $10,000 payday at the Bill Cheesbourg Memorial, the finale of the six-race WWS at USA Raceway. | Complete WWS coverage

Bagley, last year's O'Reilly SUPR champion and rookie of the year, won his first Late Model race since July and the eighth of his career.

McCreadie, the winner a week earlier in Tucson, earned $5,000 for second place and his fourth top-five finish of the Wild West Shootout. Seventh-starting John Anderson of Omaha, Neb., was third followed by polesitter Billy Moyer Jr. of Batesville, Ark., and Jimmy Mars of Menomonie, Wis., on a track surface that limited racing to the low groove the last three-quarters of the race.

Bagley jumped into the lead at the outset, quickly building a half-straightaway lead before Billy Moyer Jr. came alive on the sixth lap, taking the lead a lap later as the frontrunners entered lapped traffic.

But Bagley didn't let the leader get far away, going back ahead on lap 10 as the younger Moyer dropped back to fourth behind his father and McCreadie by lap 13. The elder Moyer, a three-time miniseries winner for the third straight year, turned up the heat on Bagley in search of an unprecedented fourth WWS victory.

When Moyer overtook Bagley on the backstretch on the 19th lap, it appeared he'd cruise to victory the last half of the race, but his No. 21 suddenly lost power on the 30th lap, handing the lead back to Bagley.

McCreadie couldn't find a way past Bagley in the single-file parade, and Bagley completed the biggest victory of his career.

The feature was slowed by four cautions, the most serious on a lap-28 restart when Lonnie Parker Jr. and Steve Isenberg tangled in turn four before taking the green. Todd Frank and Nick Bartels were also caught up in the mess with Parker and Frank retiring.

The restart followed a lap-28 caution when eighth-running Will Vaught got into the backstretch wall after contact with Ronny Lee Hollingsworth. The first caution appeared when polesitter Billy Moyer Jr. jumped the initial start and the final yellow on lap 30 for his father's departure.

Race notes: Bagley's Wayman McMillan-owned Rocket Chassis is sponsored by P&W Sales, Directional Drilling Company and MSI Pumps, Valves and Manifolds. ... Former Darrell Lanigan crew chief Randall Edwards supervised Bagley's team in the pits in Arizona. ... Fifteen of 25 starters finished on the lead lap ... Eighteen were running at the finish. ... The event honors Tucson native Bill Cheesbourg, a late USAC driver who made six starts in the Indianapolis 500 from 1957-65. His best finish was 10th in 1958.