Devin Moran scores victory Down Under 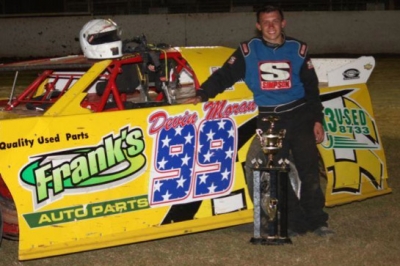 Moran, who scored a victory and two third place finishes in the event’s qualifying races, held off challenges from fellow American invader Steve Francis of Ashland, Ky., and a host of Australian drivers in the 30-lap main event to pick up the victory.

The pole-starting Moran jumped to initial lead and opened up a comfortable advantage while fourth-starting Francis worked his way forward. Francis, who scored a pair of victories in the USA Invasion Tour, looked to challenge for the lead midway through the race, but pulled to the infield with power steering issues.

Australian drivers Brad Blake, Darryl Grimson and defending race winner Nathan Disney all took their shots at Moran after Francis’ demise, but the young driver pulled away in the closing laps on his way to victory.

Late Model action Down Under will continue this weekend in the Frank’s Auto Parts Australian Late Model Championship at Tyrepower Sydney Speedway in Granville, New South Wales. The track is located just outside Sydney, New South Wale’s capital and Australia’s most populated city.