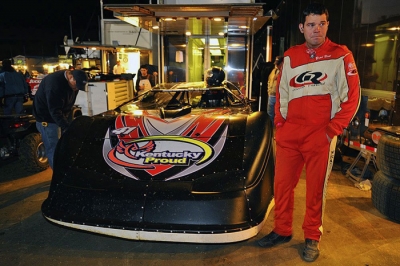 Brad Neat’s changes for the 2012 season include a chassis switch, a departure from Bobby Labonte Racing and dropping off the Lucas Oil Late Model Dirt Series. That may sound like some major shakeups for the Dunnville, Ky., driver, but Neat doesn’t see it as too big of a deal.

Neat, 32, first teamed up with BLR and driver Earl Pearson Jr. at the beginning of the 2010 season and began helping the team to develop its in-house Longhorn Chassis. But Neat continued to own his own equipment and funded his racing efforts throughout his time with the team. He even spent the majority of the 2011 season working out of his own shop back home in Kentucky.

“Things really won’t be too much different than they have been to be honest,” Neat said of his split with BLR, which was made official earlier in the week when the Trinity, N.C.-based team announced that Pearson would be the team’s only driver in 2012. “We worked together really closely, but everything still belonged to me. We just moved down there more or less just to be involved day to day with the chassis end of it and other things like that.”

Neat had his ups and downs during his two-year run with the team. He recorded one Lucas Oil Series victory both years, but he finished 12th in the tour’s standings in 2010 and eighth in 2011 while the team worked to find its way with the fledging Longhorn cars.

“Anytime you’re involved with something getting developed, there’s some things that you’re gonna have to sacrifice. But at the same time you have the opportunity to learn a lot from that,” Neat said. “We struggled at times with the Longhorn car, but I feel like we made a lot of strides with it, and I learned a lot just from being involved with the development process.”

Neat will approach the 2012 season with a business-as-usual mentality, but on paper it’ll appear as though he’s made wholesale changes. Although he plans to keep one of his Longhorns, he’ll go back to MasterSbilt Race Cars for most races. He also won’t follow the Lucas Oil Series for the first time in three years and instead will make his own schedule that “makes the most sense financially.”

About the only thing that remains the same, is his sponsor. Red Buck Cigars will stay on board for a fourth year as Neat’s primary backer.

Neither the chassis switch nor dropping off the Lucas Oil Series were Neat’s deciding factor in going back to his own program. In the end, the decision to leave BLR came down to logistics.

“Earl and all the people at Bobby Labonte Racing are all great and there’s nothing wrong or hard feelings of any kind,” Neat said. “We got to looking at it and it just made better financial sense for us to work from Kentucky rather than North Carolina where you’re farther from more racetracks. It’s almost like everywhere we went was an extra seven hours from down there.” — Joshua Joiner

Before returning to compete in 10 mostly local races last season, Chad Reichenbach of Bakersfield, Calif., had been away from Dirt Late Model racing most of the previous 10 seasons. In the late 1990s, Reichenbach was among California's top drivers, logging five career Western Dirt Late Model Tour victories including three in '98 alone.

He'd driven a variety of chassis and faced a variety of track conditions, but Reichenbach found it difficult to get back up to speed quickly.

Reichenbach plans to stick with it, though, and his lightly-race Victory Circle Chassis with a Pro Power Racing engine will be ready when the season gets rolling in a few months. He briefly considered a trip to January's six-race Wild West Shootout at Tucson, Ariz.'s USA Raceway, but his work schedule at Reichenbach's Auto Body, finances — and the progress of his racing comeback — didn't cooperate.

"I need to get some more seat time," said Reichenbach, who plans to attend was a spectator. "I want to be more competitive before I go that far."

Reichenbach's retreat from racing after the 2001 season was primarily caused by family issues. He went through a divorce, his special-needs daughter Sophie died just after her 7th birthday and "it was just kind of tough," he said. "I had to regroup emotionally and financially."

With his son Clint racing winged microsprints — and an emerging "mid-life crisis," the elder Reichenbach half-joked — Dad was drawn back to the track. Clint's moved up to hobby stocks, running strong in his debut at Victorville Auto Raceway, while Chad plans to continue his Late Model resurgence.

"I'm just trying to get back into things and get back into the swing of things," said the elder Reichenbach, who was 16th in Late Models points last season at Santa Maria Speedway. "I learned a lot last year and I'm hoping to make some progress this year." — Todd Turner

Going back to the Wells

Justin Wells of Aurora, Mo., has been among southwest Missouri's top Dirt Late Model racers over the past 10 seasons, but there will be another Wells in action this season. Justin's 16-year-old son Cole, a sophomore at Crane High School, plans to compete at Monett Speedway and in select other events during his first Late Model season.

"If he hadn't helped me, I'd probably be doing something stupid with a BB gun," the younger Wells said with a laugh about his father's assistance. "Dad's taught me everything I know about racing."

Justin Wells has racked up a pair of IMCA weekly championships, four Show-Me Racin' Series titles and is the reigning Monett champion. Cole Wells made his stock car debut in the rookie class in 2009, winning seven features before moving up to the B-modified division. Now he'll step up to Dad's division, aiming for Monett's Rookie of the Year honors.

Wells has been working hard on it preparing it for his first campaign. "We chopped and cut bars in the back," he said. "We had it down to the bare frame and put a new rear end in it, too." — Trenton Berry, RacinDirt.com