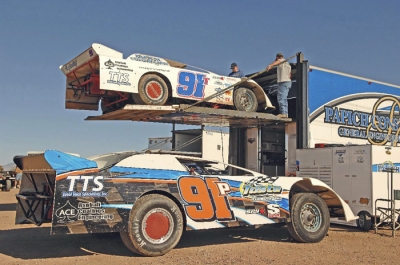 The sixth annual Wild West Shootout at USA Raceway no doubt draws an array of drivers from the upper Midwest and other states "back East" looking to escape winter weather for some racing in the warmer climes of Tucson, Ariz.

But the Arizona miniseries, scheduled for six races from Jan. 14-22 at the 3/8-mile oval, is also a big draw for California's Dirt Late Model drivers who get a chance to see how they stack up against drivers from across the country. | Complete WWS coverage

Last year, 11 California drivers entered at least one event in Tucson, and race director Chris Kearns — who during the regular season promotes Santa Maria (Calif.) Speedway and the West Coast Shootout Late Model tour — thinks that number will at least be matched this time around. There's been plenty of buzz about teams making the 10-hour haul from southern California.

"I've just heard more talk about it of guys coming to it then ever before," Kearns said. He expects "real decent car count coming out of California. I'm pretty excited about it."

If Golden State drivers want to discover their standing among Dirt Late Model's best drivers nationally, they'll get perhaps their best chance ever this year, Kearns said. With commitments from drivers like Billy Moyer of Batesville, Ark., Don O'Neal of Martinsville, Ind., Jimmy Mars of Menomonie, Wis., Tim McCreadie of Watertown, N.Y., Shannon Babb of Moweaqua, Ill., and Shane Clanton of Fayetteville, Ga.,ï¿½ talent will be abundant at the Wild West Shootout.

The roster is shaping up as "without a doubt the stiffest competition we've ever had out here," Kearns said, reeling off the names of McCreadie, Babb, O'Neal and Moyer. "Just those four right there, that's pretty stout.

Ready for the season

When you had a season like Don O'Neal did in 2011, you never want it to end. That's why the 47-year-old driver Martinsville, Ind., who captured three crown jewel victories last year, is ready to get his 2012 rolling as quickly as possible with a trip to Tucson.

"It seems like it's been a lot longer than two months since we've been racing," said O'Neal, whose last victory came with a $50,000 payday at the Dirt Track World Championship at Ohio's Atomic Speedway. "I can't wait to get at it again."

O'Neal hasn't competed in the Arizona miniseries since 2005, when he won the opening event at Central Arizona Raceway in Casa Grande. Whether Casa Grande to Tucson — or just about anywhere — the driver of the yellow No. 71 MasterSbilt Race Cars house car is just glad to be racing again.

"I'm just excited to go racing, whether we're going to Macon, Ill., or Rossburg, Ohio," he said. "It doesn't matter where we're going as long as we get to race. ... Hopefully, we can back up what we did last year, and hopefully do a little more."

There might be a little time for some sight-seeing in a faraway state, but O'Neal says he'll be focused on checkered flags when he reaches USA Raceway.

"We may take a day or two and play, but our bottom line, we're going out there to see if we can't win some races," he said. — Ben Shelton

The Wild West Shootout draws a gathering of perhaps more Victory Circle Chassis teams than any other event in the country. Along with teams who are locally served by the Bakersfield, Calif.-based manufacturer, dealers Billy Moyer of Batesville, Ark., and Mike Balcaen of Winnipeg, Manitoba, are miniseries regulars who come along with several customers.

Victory Circle won five of six races last season at Tucson, and it's nice to enjoy a week where the chassis has a chance to dominate, said driver Billy Moyer Jr., who drives a chassis out of his father's shop.

"First and foremost, we want our cars to win, Moyer cars, and if our cars can't get it done or something happens, we're definitely going to root on a Victory Circle (competitor), because we're all a big team," said the younger Moyer, who won last year's miniseries opener. "If we can't win, we definitely want one of our cars to win. I think that's how all those guys feel. It's kind of nice going out there, we're kind of Victory Circle dominant out there. Mainly, if we come around (home), we're not as popular as Rocket and MasterSbilt ... a lot of these (tracks) are Rocket or MasterSbilt dominant, so that's one place we get to go to where the field is more Victory Circle."

Moyer finds the 3/8-mile oval to his liking, personally, as well.

"The track's always prepared well, those guys do a real good job, and I'm more of a hard-tire (driver), everybody knows that favors me," he said. "That place has got big corners and you gotta drive your race car like halfway finesse and keep it underneath of you, instead of getting bent out of control and wheel-spinning. We can relate to some tracks I've been to like that, and we've got a good setup to keep our (car) free and turning through the corner and everything." — Ben Shelton

Jimmy Mars, a two-time winner at Tucson, says the extreme oval shape of the track helps drivers maintain high-speed momentum and "you get whipping around there at a pretty good rate," he said. "Things happen fairly fast, and it with it being a little bit tighter, it makes for definitely some interesting races." ... Among first-time drivers expected at Tucson are Scott Creel of Franklinton, La., Chris Simpson of Oxford, Iowa, and Klint Byars of Carrollton, Miss., the Mississippi State Championship Challenge Series champ. ... Terry Phillips of Springfield, Mo., the all-time winningest Arizona miniseries driver with nine victories, plans to debut a Bloomquist Race Car in Tucson; he's driven GRT Race Cars for most of the past 20 seasons. ... Other drivers will be debuting new chassis, too; McCreadie will be in a new Warrior Race Car and John Lobb of Frewsburg, N.Y., has switched to Capital Race Cars along with his new Kennedy Motorsports teammate, Shane Clanton of Fayetteville, Ga.