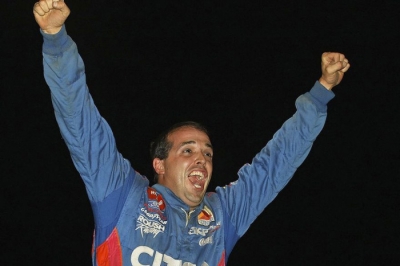 Jesse Stovall will start the 2012 racing season much like he did 2011 by heading west to Tucson, Ariz., to compete in the Wild West Shootout at USA Raceway. Only this year the Galena, Mo., driver will be making the trip with a different car owner.

The Stovall-Bishop partnership, which produced 21 modified victories during their only year together in 2010, will attack the season with goals of competing for victories right out of the gate in Tucson’s WWS miniseries that includes six races from Jan. 14-22.

“I feel really good going back out there,” Stovall said of Tucson, which hosts four races that pay $3,000 to the winner, one that pays $5,000 and a $10,000-to-win finale. “We’ve made a few changes, but we’re excited about making the trip. Me and Steve Rushin did pretty good out there last year, and I feel like me and Fred can go back out there and be just as competitive and hopefully run up front.”

Stovall’s move back to Bishop’s team comes after a successful one-year stint driving for Rushin. The team kicked the year off by making all six Wild West Shootout main events at Tucson with a best finish of fourth. They went on to win three MARS DIRTcar Series races on the way to a runner-up finish in the final series standings and added two non-series event victories.

But when Stovall’s former car owner approached him about teaming back up in the Late Model division, Stovall couldn’t turn the opportunity down. That wasn’t because there was anything wrong with his deal with Rushin, but rather because driving for Bishop would be better logistically for Stovall, who will keep the team’s cars in his own shop.

“There’s no hard feelings with Steve by any means,” Stovall said of his split with Rushin, the long-time Poplar Bluff, Mo., driver and car owner. “Things just worked out with Fred where we could team back up. This just makes it a little easier so I don’t have to drive so far over to Rushin’s shop every week and I can keep the race car at my shop with this team. I appreciate the opportunity Rushin gave me, but this is just a better situation for me personally.”

Don’t expect it to take very long for Stovall and Bishop to readjust to working together. The pair shares a good relationship both professional and personally that Stovall says goes beyond the racetrack.

“They’re more like family than they are just my car owners,” Stovall said of Bishop and his family. “We spend time together a lot doing various things besides racing. He and his wife and his two boys, they’re all great people and they’ve taken me in almost like another family member. They’re an awesome group of people to be with and they make racing a lot of fun.”

While he may be switching teams, Stovall will still drive the same Victory Circle by Moyer Race Car that he drove for Rushin during the second half of last season. Bishop purchased the car from Rushin, and the team plans to add another Victory Circle car from National Dirt Late Model Hall of Famer Billy Moyer to their arsenal with engines supplied by Scott Bailey Racing Engines.

Being able to continue driving a Victory Circle was one of the biggest factors in Stovall’s decision to go with Bishop. Stovall, who also drove one of Moyer’s cars when he made his first foray into the Late Model division with car owner Paul McKenna in 2008, has a strong working relationship with Moyer and is more than happy with his race cars.

“Those cars are second to none,” Stovall said of the cars from Moyer’s Batesville, Ark., shop. “And I don’t think you could ask for a better mentor in having Billy to be able to talk to and him be able to give you advice. I’ve formed a pretty close relationship with him over the few years. We got in one of his cars kinda at ground level (in 2008) when he first started selling them and he’s just been nothing but good to me.”

Along with driving a car he’s familiar with, Stovall will also have the added benefit this season of competing full time in the Late Model division for a second consecutive season for the first time in his career.

Stovall was among the most impressive rookies nationwide in his rookie season with McKenna in 2008, scoring seven victories and building the foundation for a successful transition from modified racing. But after a rough start in 2009, Stovall split with McKenna. With a return to modifieds for the remainder of 2009 and 2010, Stovall’s Late Model career and his development in the full-fendered cars were put on hold.

Now after successfully moving back to Late Models last season, Stovall is excited for the opportunity to continue to build momentum.

“Each year I get in one of these Late Models I feel better and better,” Stovall said. “Hopefully I continue growing and learning with more and more success each year. This will be the first time I’ve had a second year in a row in a Late Model and I think that’ll let me kinda keep building on what I done last year and the improvements I made. I feel like I still have room to grow and improve, so hopefully I just keep getting better.”

In addition to his team switch, Stovall will likely make a series switch for the new season as well. He had a solid year on the MLRA tour last season, but the tour may not be the best option logistically for Bishop, who lives in Dewey, Okla.

After the Arizona trip, Stovall plans to start the season by following the Lucas Oil Midwest LateModel Racing Association. The team hasn’t decided whether or not they’ll stick with the tour for the whole year, but that could be an option if they start out well.

“We’re leaning towards MLRA a little bit just because it runs a little closer to Fred. MARS goes over into Illinois and Kentucky and that’s a pretty far drive for him. We’ll still run a good bit of the MARS races, but we’re gonna start out the year probably running the first handful of MLRA races and see how things go.”

For now, Stovall is fully focused on a strong start to the season in Tucson. But even after a solid trip west last season, he may have to work a little harder to match those results with a stronger field of competitors expected to enter the sixth edition of the miniseries.

“It sounds like there’s going to be a lot more competition out there than what we had last year, but that’s what makes it fun,” Stovall said. “If we went out there and there wasn’t no one to race against it wouldn’t be no fun. The more the merrier.”

Even with the extra competition and a new team, Stovall isn’t relaxing his goals for the week. He’s confident the team can compete for a victory.

“To win a race or two would be outstanding for us, but just to be competitive and racing in the top five or top 10 every night would be a pretty good goal,” Stovall said. “We just want to be up there and be competitive each night. If you do that, that’s how you win races.”