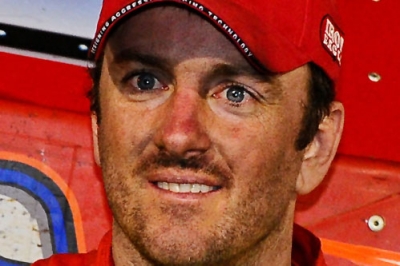 Tim McCreadie has already set his goal for the 2012 season.

“We’re focusing on the World of Outlaws championship,” said McCreadie, who won the national tour’s lucrative points title in 2006. “It’s not gonna be like the last couple years where we went to the races at the beginning of the season and then decided we were gonna do the whole series. We have a plan this year.”

That plan is highlighted by a dramatic revamping of McCreadie’s program under the Sweeteners Plus Racing team banner. He announced last week that his operation has forged a partnership with Sanford Goddard’s Knoxville, Tenn.-based Warrior Chassis — a deal McCreadie hopes will provide the type of intimate manufacturer support that propels him back into the headlines.

McCreadie, 37, of Watertown, N.Y., is coming off a rough 2011 campaign that saw him finish fourth in the WoO points standings with only one series victory. He struggled at the start of the season to get his new Rocket cars up to speed and failed to catch fire after switching to Victory Circle machines that had been sitting in his team’s shop for two years, prompting the competitive professional to consider another option for ’12.

“I think working with Warrior is a perfect deal for us,” said McCreadie, whose 2011 stint in Victory Circle cars marked the first time in his eight-year Late Model career that he did not concentrate on driving Rockets. “I need to get with a company that I’m comfortable with and can be a little more hands-on with us, and after sitting down with Sanford and seeing his boys down there at his shop I felt like Warrior was where we need to be with our team to be successful.”

McCreadie got his first taste of a Warrior mount when he accepted Goddard’s offer to run the house car in the unsanctioned National 100 on Nov. 13 at East Alabama Motor Speedway in Phenix City, Ala. The trial outing resulted in a solid fifth-place finish that left McCreadie impressed with the car’s potential.

“The car shined all weekend,” McCreadie said of his National 100 effort. “We timed up front, won a heat and were competitive with a real good field of cars in the feature even though I didn’t know how to adjust the car to where I wanted it. Knowing what we did to the car and where we finished, I felt like if we could’ve started the race over again we would’ve been even better.

“I already knew that Warrior had a great car because it seems like everybody who’s gotten into the house car runs good, which tells me it’s a chassis design that’s built to be able to handle different driving styles. I could tell it has a pretty good sweet spot after spending a weekend driving it, and working with Sanford really gave me more to think about.”

After consulting with Sweeteners Plus team owner Carl Myers and his teammate Vic Coffey upon his return to the Empire State, McCreadie decided to talk further with Goddard. They soon reached an agreement in which Myers would purchase Warrior cars for McCreadie and Goddard would provide McCreadie and Co. valuable technical support. (Caledonia, N.Y.’s Coffey also plans to follow the WoO again but will continue to run the Rocket cars in which he has developed a comfort zone.)

While McCreadie is not a Warrior house car driver, the small size of Goddard’s chassis manufacturing business opens the door for McCreadie to enjoy an extremely attractive level of personalized assistance. Goddard, in fact, plans to attend many of McCreadie’s events in 2012, buoying McCreadie’s assault (he figures to be the only WoO regular in a Warrior chassis) while also helping to grow Warrior’s national profile.

“With Sanford being able to get out there on the road and go to most of the races, we’re going to have a program more along the lines of some other successful teams when it comes to on-track support,” said McCreadie, who will also share technical notes with Warrior chassis driver Dale McDowell and McDowell’s veteran mechanic brother Shane. “Really, our program is gonna be no different from what (two-time WoO LMS champ) Josh (Richards) has with his father (Mark) and their guys (with the Rocket Chassis house car team) and Don O’Neal has with MasterSbilt (the manufacturer’s house-car program). We’re not a house-car deal, but we’re a team that’s traveling more so part of our deal with Sanford is to get him out on the road with us to lend his advice and expertise in trying to go faster.

“I think the thing about working with Sanford that I’m really looking forward to is that if we’re struggling, now we’ll have an extra set of eyes and seven or eight people back in the (Warrior) shop who can help try to make us better.”

Goddard is as excited as McCreadie to begin the new partnership.

“It’s good to have Tim McCreadie on board with the Warrior race team,” Goddard said. “We’re really looking forward to just racing with somebody with his caliber, just to be able to go out and show what we have in our product. I’ve never raced (with the World of Outlaws) for a full season, but I’m looking forward to racing with Tim and trying to win a championship.”

The $100,000 WoO title is obviously on McCreadie’s mind. Running a series that feels “like home” to him, he wants to erase any lingering memories of a 2011 season that didn’t meet his expectations.

“Last year was probably the most frustrating season I’ve had in a long time,” said McCreadie, who finished a strong third in the 2010 WoO points (his first season as a regular since he won the championship in ’06) but disappointingly slipped to fourth in the ’11 points race. “We’re just gonna throw that whole year in the garbage and not take anything out of it. After Charlotte, I said we were gonna immediately start fixing our program and I think we’re on the right track.”

McCreadie is hoping to make his 2012 debut in a Warrior car next month with a cross-country trip to Tucson, Ariz., for the Wild West Shootout at USA Raceway. He sees the miniseries as a perfect forum to get acclimated to his new equipment.

“We should have two cars ready to go to Arizona,” McCreadie said. “That deal is a unique opportunity to start the season early and learn some things about running on hard tires. I think it could really help us.”