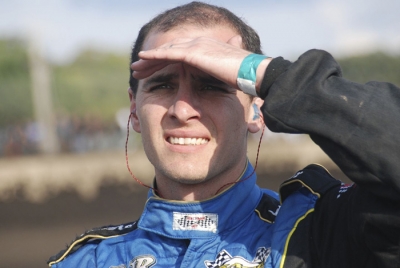 Ryan Unzicker wasn’t going to let the 2011 UMP DIRTcar Late Model championship slip through his fingers. Not after leading the points standings for more than four months. Not with his dream so close to being realized.

Unzicker, 30, of El Paso, Ill., wanted the national title more than he’s wanted anything in his racing career and, thanks to a dramatic final-month surge, he got it. After losing the points lead with just over one month left in the season, Unzicker roared back to win the $20,000 crown by 49 points (2,551-2,502) over defending champion Rusty Schlenk of Weston, Ohio.

“It’s just so satisfying that we were able to pull it off after setting a goal of winning the championship,” said Unzicker, who will receive his points-fund check and championship trophy during the 28th annual UMP DIRTcar banquet Jan. 7 at the Crowne Plaza in Springfield, Ill. “We live right in the middle of UMP country and I’ve been racing with UMP ever since I started, so winning the national championship was my ultimate goal when I first got in the Late Model. Anytime you can achieve your goal, it’s a pretty good accomplishment.”

Securing the crown with style added even more significance to Unzicker’s breakthrough campaign, which put him at the pinnacle of UMP’s weekly racing program in just his seventh season of Dirt Late Model competition. He responded to Schlenk’s late-summer rally by flashing true championship mettle, going on a hot streak with his family-owned team that dwarfed any he had previously experienced in his career.

After Unzicker’s once 300-plus-point edge turned into a deficit of nine, and then 37, points to Schlenk over a two-week period in late August and early September, his championship hopes appeared to be on life support. But over the next two weekends he was almost perfect, finishing second on Sept. 9 at Kankakee (Ill.) County Speedway and then ripping off a career-high four consecutive wins, on Sept. 10 at LaSalle (Ill.) Speedway, Sept. 11 at Tri-City Speedway in Pontoon Beach, Ill., Sept. 16 at Kankakee and Sept. 17 at LaSalle.

By the end of the streak, Unzicker found himself back on top of the national standings by 33 points over Schlenk after falling as far back as third. He finished no worse than seventh in his next six starts and clinched the title with his 17th victory of the season on Oct. 1 at Kankakee, allowing him to enter the ensuing weekend’s season-ending UMP Nationals at Eldora Speedway in Rossburg, Ohio, with no points pressure hanging over his head.

“We had a couple or three bad weeks, but we just knew the points were gonna get close toward the end of the year with the throw-out numbers,” Unzicker said of the national standings, which were determined using driver’s best 35 finishes. “When (Schlenk) came on and passed us, we all knew we had to step up. It was a lot of pressure, but we knew we could still do it.

“We just buckled down and kept digging. We put some new parts on the car and spent extra time in the garage because we didn’t want to take chances with anything. We made sure everything was right, and what we did the last month showed that we put in our homework.”

The tight points race forced Unzicker to bypass several major events, including the World 100 at Eldora, that he would have otherwise entered in favor of chasing points in weekly shows closer to home, but the sacrifice ended up being well worth it.

The importance of claiming DIRTcar UMP’s marquee national title was not lost on Unzicker. He was, after all, born and raised in El Paso, a small town just a half-hour west of the Fairbury (Ill.) American Legion Speedway, and his first racing championship came in the street stock division at Farmer City (Ill.) Raceway in 2003.

“When I started running the Late Model stuff I knew there were a lot of names around this area that had won the national championship,” said Unzicker, who did some pavement racing on the ARCA and ASA series in 2003-04 before shifting his focus to Dirt Late Model. “I wanted to be on that list. I wanted to be there forever. To accomplish it, it’s really neat. Now I can go to all my home tracks and just feel good about myself.

“We put so much heart, effort and work into it, and it’s great to see that stuff like that pays off. There are a lot of racers and people who put a lot of time and money into racing and they don’t get what they plan on getting, so I feel good that we were able to accomplish our goal. Hopefully we can proceed and keep going to even bigger things.”

The future certainly appears bright for Unzicker. A relative newcomer to the motorsports game — he didn’t begin his driving career until 2003 after graduating from Eureka (Ill.) College with a degree in Business Administration — his career arc is still very much on an upward trajectory.

Unzicker has shown steady shown progress in each season since he began touring in 2008. His final points standing has gone from 11th (’08) to sixth (’09) to third (’10) and finally this year’s title, while his finish in the grueling Summernationals standings has leaped from 12th in ’08 to seventh in ’09, fifth in ’10 and fourth this season.

He nearly doubled his previous single-season high win total in 2011 (his victories came at eight different tracks in Illinois, including Fairbury, where he won three straight Saturday-night events during the summer), and he’s won a Summernationals feature in each of the last two seasons. Unzicker also has finished second in the Northern All-Stars Late Model Series points standings for two consecutive seasons.

A cerebral married man who makes his living as the safety director at his family’s RJR Transportation company, Unzicker and his family have assembled a formidable team that has plenty of room to grow. He sees the potential there to eventually meet any goal he can set.

“We want to keep building our program,” said Unzicker, who campaigns MasterSbilt cars powered by Rhyne Competition Engines. “We keep improving every year, getting our cars and motors a little bit better. It’s a long process, but we’re seeing results and we think we can do a little better next year.”

While Unzicker would love to test his talents on a national tour like the World of Outlaws Late Model Series in the future if he can obtain sufficient sponsorship, he anticipates that the Midwest will remain his focus in ’12.

And wherever Unzicker appears with his familiar No. 24 machine — whether it be in a local weekly show, a Summernationals headliner or a regional special – he’ll receive plenty of attention. After becoming the 19th driver to win the DIRTcar UMP Late Model national title since 1984, he’s earned it.