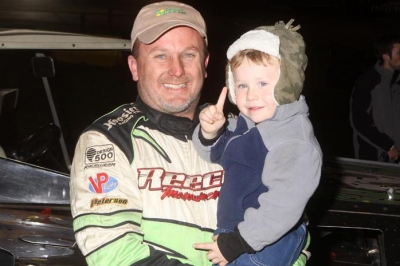 With the 2011 racing season in the books, DirtonDirt.com takes a closer look at top five drivers among national, regional and weekly Dirt Late Model competition. Here's the Best of 2011:

Jimmy Owens (20), Newport, Tenn.: After twice coming up one position short in the Lucas Oil Late Model Dirt Series championship battle, the 39-year-old Owens unseated two-time defending series champ Scott Bloomquist for the national tour’s $75,000 title in one of the most dramatic points battles in the history of the sport. If that wasn’t enough, Owens also posted three crown jewel victories on the season. His eight Lucas Oil Series wins included his first Show-Me 100, which later became the first Dirt Late Model event to appear on a major broadcast television network, and his third North-South 100. He also won his second World 100 trophy at Eldora in September before wrapping up the season with his third-consecutive victory in second round of the World of Outlaws World Finals at The Dirt Track at Charlotte. | Best of 2011 coverage index

Scott Bloomquist (0), Mooresburg, Tenn.: The 48-year-old Bloomquist blew away his own single-season win record on the Lucas Oil Series with an astounding 15 victories in 2011. But untimely miscues and misfortunes allowed Owens to stay close in the title chase, and mechanical woes in the next to last race at Rome (Ga.) Speedway dealt Bloomquist a final blow he couldn’t overcome. Still the year will go down as one of the Hall of Famer’s best with triumphs in Batesville (Ark.) Motor Speedway’s Topless 100, Brownstown (Ind.) Speedway’s Jackson 100 and Virginia Motor Speedway’s USA 100. He also added $20,000 victories at Lone Star Speedway in Kilgore, Texas, and Magnolia Motor Speedway in Columbus, Miss.

Don O'Neal (71), Martinsville, Ind.: One of the sport’s top drivers without a crown jewel victory entering the season, O’Neal emphatically erased his name from that list by winning three of the sport’s biggest races in 2011. O’Neal’s triumphs in the MasterSbilt Race Cars house car included $100,000 in Eldora’s Dream XVII and $50,000 in the Dirt Track World Championship at Atomic Speedway. In his part-time Moring Motorsports ride, the 47-year-old O’Neal added victories in Knoxville (Iowa) Raceway’s Knoxville Nationals finale and the inaugural Silver Dollar Nationals at I-80 Speedway. O’Neal notched five Lucas Oil Series victories on his way to a third-place finish in the series standings behind Bloomquist and Owens.

Jonathan Davenport (49), Blairsville, Ga.: After posting just one victory paying $10,000 or more between February and September, the 28-year-old Davenport piloted the Barry Wright Race Cars house car to seven such paydays during October and November. His impressive late-season streak included back-to-back $15,000 Mississippi triumphs at Whynot Motorsports Park and Magnolia Motor Speedway, his second-consecutive victory in the opening round of the World of Outlaws World Finals at Charlotte and his second sweep of East Alabama Motor Speedway’s Alabama State Championship and National 100. He topped it all off the first week in December by winning the $10,000 NeSmith Chevrolet Dirt Late Model Series finale in an AES Racing Team Crate Late Model. Davenport will join Clint Bowyer Racing for a run at the Lucas Oil Series title in 2012.

Ray Moore (93), Haughton, La.: Using a less-is-more approach with a selective racing schedule, the 30-year-old Moore turned in his best career season with 14 victories, nearly all of them in sanctioned special events. His biggest career victory came at ArkLaTex Speedway's Pelican 100 in February, paying $10,000, but his best stretch of racing from April through September was just as impressive. During those six months, Moore won 10 of 16 feature starts and impressed with a five-race winning streak from May 29-July 1.

Jason Covert (43a), York Haven, Pa.: The 41-year-old driver won his sixth touring championship overall and third in a row on the Three State Flyers in one of the most competitive regions of the country. Covert had 10 victories in 48 starts overall, including a run of six triumphs over a nine-race stretch from June 24-July 22. He was in the top five 28 times.