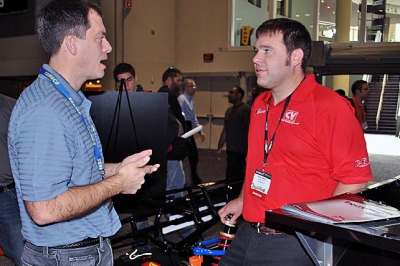 ORLANDO, Fla. — Matt Miller of Whitehouse, Ohio, was in an unfamiliar role at this weekend’s Performance Racing Industry trade show in Orlando. Instead of perusing the Orange County Convention Center as a driver checking out new products, Miller was manning a booth this year as a representative for Michigan-based Corrigan Oil and Sunoco Race Fuels.

Miller, who has raced professional for nearly 15 years many of which were with McCullough Motorsports, is stepping away from full-time racing and starting a job that he feels is better for his future.

“I’ve raced for a lot of years and done it for a living; I’m thankful and it’s been great,” Miller said. “I’ve had a lot of great car owners, but the grind of the road’s been a lot. I’ve been thinking about what I’m gonna do after racing. I didn’t want to do it into my 50s and 60s.

“Joining Corrigan Oil in Michigan to be a Sunoco rep and salesman, it’s a great opportunity for me,” he added. “If I want to do some racing, they’re gonna allow me to do that on the side too.”

Miller hopes to do at least some racing on a part-time basis, but he currently doesn’t have any plans in place yet. He’s hopeful something will materialize that will allow him to at least race in events at his home-state track of Eldora Speedway, where he scored the biggest victory of his career six years ago in the $100,000-to-win Dream.

“I’d like to do some part-time racing, especially maybe Eldora and places like that. I feel like I can still be competitive and win races, but I wanna do it on more of a scaled-back deal,” Miller said. “We’ll see what the future brings, but I’d still like to keep my hand it racing a little bit.”

Miller knows the transition away from full-time racing won’t be easy, especially when he has to attend races for his new job.

“I’m sure as racing season comes around and I go to races and have to be around it, the itch will come back,” he said. “If I have to go to East Bay and stuff like that and watch, it’ll be tough, but hopefully there’ll be some opportunities where I can get my fill of the racing side.”

Shane Clanton isn’t new to PRI, but his trip to the show this year was different than in years past. For the first time, Clanton was walking the aisles not representing long-time car owner Ronnie Dobbins and his RSD Enterprises race team.

Clanton, the Fayetteville, Ga., driver who has driven for Dobbins since he advanced to the Super Late Model division in 2003, is moving to Kennedy Motorsports for next year, joining current team driver John Lobb of Frewsburg, N.Y.

But even though he was walking the trade show floor with a new teammate and a new car owner, the objective for his weekend in Orlando was still the same.

“The main thing is just meet and greet,” said Clanton, who uses the show as an opportunity to visit with his product sponsors. “I hate just calling people and saying ‘Hey I need some help on some stuff’ and not putting a name to a face. Coming to a big show like this, you get to meet people you’ve never seen before and I get to introduce my new car owner (John Kennedy) to the people who help me out some.”

Clanton also used the show to scope out chassis parts and components for his fledgling race car chassis brand, Capital Race Cars. Clanton struggled at times in the new car after debuting it at the beginning of the this year, but he’s optimistic he and Lobb will be successful racing Capital cars full time on the World of Outlaws tour in 2012.

“Two cars of the same (chassis brand) at the same racetrack is going to help out tremendously,” Clanton said. “We’ve got our work cut out. We’re gonna go back to the shop and build three more new cars. We have one frame setting there ready to go. We have a lot of work to do, but I’m looking forward to it.”

Clanton isn’t the only one excited about his move. Lobb is looking forward to having Clanton help in 2012.

“I’m very excited about this,” said Lobb, who finished 13th in the WoO standings this year as a rookie. “Shane was kind of my mentor last year that we traveled with. He helped me along the way. We work well together and I’m real excited to switch over to these Capital cars.”

World of Outlaws regular Tim Fuller of Watertown, N.Y., was another PRI attendee participating in a new role this year. Fuller was attending the show for the first time as a team owner after parting ways with John Wight’s Gypsum Express team earlier this year and putting together his own operation to remain on the WoO tour.

Making contacts and scouting out potential product sponsors is now of the utmost importance for Fuller now that he’s financing his own race team.

“Now that I’m the car owner, the trade shows are more important now than ever,” Fuller said. “You’ve gotta get out there and find the deals that make it a little more efficient on your pocketbook. So yeah, I’ve got to do everything I can do here and scrounge up what I can to make it through another year.”

Fuller hopes another year will mean another season following the World of Outlaws, but as of now, he’s not sure if that will be possible. Whatever the case, he’ll be racing somewhere in 2012, splitting time between his Late Model and big-block modifieds.

“My plans for next year are racing. As far as how much Late Model racing and how much modified racing I’ll do, that’s still up in there air,” Fuller said. “I’m gonna start out on the Outlaws tour and that’s where I want to stay.”

The 2012 schedules for both the World of Outlaws Late Model Series and the UMP DIRTcar Summernationals were released Thursday at PRI. ... One of the most talked about Dirt Late Model-related items at this year’s show wasn’t a race car or even a chassis part or component. It was a T-shirt in the Wiles Driveshafts booth that comically depicted the process Menomonie, Wis., driver Jimmy Mars went through earlier this year to prove his innocence after his tires were protested following his $30,000 victory in the World of Outlaws-sanctioned Firecracker 100 at Lernerville Speedway. ... As Milton, Fla., driver Joseph Joiner found out this weekend, the trade show floor at PRI is quite expansive. Joiner, the Southern Raceway Super Late Model champion, was hoping to make it through the entire show on Friday, but after just a few minutes at the show, he didn’t know if that would be possible. "I can see now how people can spend the whole weekend down here. There's a lot to see here," he said.