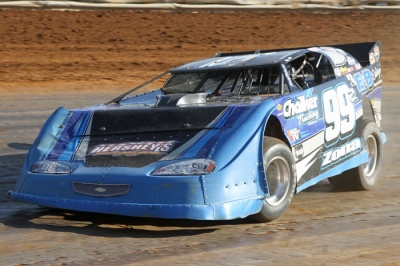 Ronnie DeHaven Jr. of Winchester, Va., Dave Zona of Montrose, Pa., and Kyle Lear of Severna Park, Md., were the other heat winners who earned top starting spots for Sunday's unsanctioned main event, a 100-lapper paying $10,000 to the winner at the half-mile oval.

Dan Stone of Thompson, Pa., crossed the line first in the fourth and final heat, but he was stripped of the victory when he came up 30 pounds light at the scales. Stone transferred to the main event through a consolation race won by Duane Harbaugh.

Notes: Prelims were also held for big-block and small-block modifieds. .... Larry Wight starts on the pole in both modified features. ... Because the makeup conflicted with a sprint car event at Pennsylvania's Susquehanna Speedway, sprints will run their prelims and main event on Sunday. ... Pit gates open at 8 a.m. Sunday with grandstand gates opening at 9:30 a.m. Sprint prelims begin at noon.