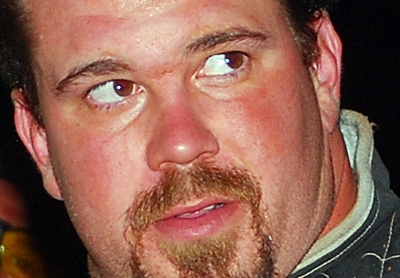 Jonathan Davenport nearly pulled off an unprecedented sweep of last year’s Lowes Foods World of Outlaws World Finals presented by Tom’s Snacks, Coca-Cola and Nature’s Own. This weekend (Nov. 3-5) he returns to The Dirt Track at Charlotte looking like a driver who just might get out the broom and finish the job.

Blairsville, Ga.’s Davenport enters the World of Outlaws Late Model Series portion of the fifth annual World Finals — a three-day festival of speed that also includes the World of Outlaws Sprint Car Series and the Super DIRTcar Series for big-block modifieds as arguably the hottest full-fender competitor in the country. His sizzling, season-turning month of October featured four special-event victories in five weekends, a surge that brought him and car owner Barry Wright a cool $50,000 in first-place earnings.

“We struggled the beginning of the year,” Davenport said after his latest triumph on Oct. 29 in the unsanctioned Cotton Pickin’ 100 at Magnolia Motor Speedway in Columbus, Miss., “but we’ve come on strong here at the end.”

Davenport, who turned 28 on Oct. 31, was virtually flawless during the 2010 World Finals. He set fast time in both rounds of time trials, won his heat race for both the Saturday afternoon and evening programs (a day-night doubleheader was set up by a rainout on Friday) and scored a win and a second-place finish in the main events. If he had won last year’s nightcap, he would have become the first driver to enjoy a perfect run through the World Finals.

For most of the 2011 season, of course, Davenport didn’t look like a racer capable of playing another starring role in the World Finals. He was unable to find a consistent rhythm with Wright’s house car team during his travels — until autumn arrived, that is. He gained some momentum with a $5,000 triumph on Sept. 24 at Virginia’s Wythe Raceway and then went absolutely wild in October, rolling up four five-figure checkered flags: the unsanctioned Alabama State Championship on Oct. 2 at East Alabama Motor Speedway in Phenix City ($10,000); the Raye Vest Memorial on Oct. 15 at Winchester (Va.) Speedway ($10,000); the Fall Classic on Oct. 22 at Whynot Speedway in Meridian, Miss. ($15,000); and last Saturday night’s 100-lapper at Magnolia ($15,000).

Davenport, whose only career WoO victory came in last year’s World Finals opener, has four top-five finishes in nine series starts this season. His best outing was a runner-up finish in the Outlaw Sizzler 101 on July 3 at Tazewell (Tenn.) Speedway.

For the third consecutive year, the WoO championship battle will conclude in dramatic fashion during the World Finals.

Rick Eckert of York, Pa., sits on the precipice of his first-ever WoO crown, leading the standings by 14 points over two-time defending champion Josh Richards of Shinnston, W.Va. The 45-year-old veteran can clinch the $100,000 title — regardless of the 23-year-old Richards’s performance — if he finishes at least third in both features.

Richards owns the more formidable record at Charlotte in general and the World Finals in particular. For starters, he’s the only WoO regular who has won an feature during the World Finals (the Saturday race in 2008) and he’s finished outside the top 10 just once in eight features since the event’s launch in 2007.

Richards also has dealt with the pressure of nip-and-tuck title races the last two years (he beat Steve Francis by 14 points in ’09 and Darrell Lanigan by four markers in ’10), and he’s won the track’s October World of Outlaws Late Model Showdown three years in a row (including a dominant victory in this season’s version three weeks ago).

Richards will also be gunning for the WoO single-season win record this weekend. His nine victories in 2011 currently has him tied with Scott Bloomquist’s standard-setting 2004 campaign.

Eckert, meanwhile, has never won at Charlotte, but he’s certainly no slouch at the 4/10-mile oval. He's been eighth or better in half of eight World Finals starts and finished a solid fourth in last month’s World of Outlaws Late Model Showdown.

The World Finals will mean more than Late Model competition for tour regulars Tim McCreadie and Tim Fuller, who will both pull double-duty by adding a return to their DIRTcar big-block modified roots to their itineraries.

McCreadie, 37, and Fuller, who turned 44 on Oct. 28, will drive their familiar Late Models in the full-fender action — McCreadie will run the Sweeteners Plus No. 39 and Fuller will go to the post in his own BPG Inc. No. 19 — and also steer big-block mods for Empire State-based teams that they hook up with for selected events that fit their schedules. McCreadie’s modified ride is the Vinnie Salerno-owned Four Star Racing mount — a machine he drove to victory in last year’s World Finals Super DIRTcar Series nightcap — and Fuller will campaign the J&S Racing No. 74.

While the two drivers from Watertown, N.Y., have never won a WoO event at Charlotte, both have reached victory lane there in Super DIRTcar Series shows during their big-block modified careers. McCreadie was triumphant on April 6, 2002, before adding a second triumph last year, and Fuller hit paydirt on May 25, 2005.

McCreadie, who sits fourth in WoO standings, has come close to the winner’s circle at Charlotte in World of Outlaws competition, having finished second in the 2009 World Finals finale and the 2010 Showdown event. He also had a second-place run going in last year’s World Finals opener until a flat tire knocked him out late in the distance and left him 23rd in the final rundown.

Fuller, who ranks ninth in the WoO points standings and needs a victory this weekend to avoid his first-ever winless season since becoming a tour regular in 2007, has only a single memorable run at the World Finals — a third-place finish from deep in the field in the finale of the 2007 twinbill.

Chub Frank of Bear Lake, Pa., enters this weekend’s action facing the prospect of a second straight winless season on the WoO, but he nonetheless can claim a sense of accomplishment by locking down his first top-five finish in the points standings since 2008.

The 49-year-old Frank currently holds fifth in the rankings thanks to a steady but unspectacular 2011 season in which he’s scored five top-five and 16 top-10 finishes. He leads sixth-place Shane Clanton of Fayetteville, Ga., by just 16 points, seventh-place Austin Hubbard of Seaford, Del., by 42 and eighth-place Clint Smith of Senoia, Ga., by 74.

Charlotte, of course, hasn’t been kind to Frank. While he didn’t compete in the 2009 World Finals doubleheader because of the fractured cheek and orbital bones he suffered on the eve of the event when an apparent clod of hard-packed clay struck him in the helmet during qualifying for the rescheduled WoO Showdown, his finishes in the other three editions of the event have been pedestrian: 14th and 24th in ’07; 12th and sixth in ’08; and 25th and 26th in ’10.

Charlotte marks Austin Hubbard's last start for retiring car owner Dale Beitler, who recently announced that he plans to disband his racing team. The Maryland resident has owned race cars for more than two decades. ... Pat Doar of New Richmond, Wis., who will look to put the finishing touches on his 2011 Rookie of the Year campaign this weekend, has never entered the World Finals. His first appearance at The Dirt Track came in last month’s WoO LM Showdown when he finished 21st. .... No driver has enjoyed more success in the World Finals than Scott Bloomquist of Mooresburg, Tenn., who won the opening-night 50-lapper in 2007, ’08 and ’09. He was uncharacteristically a non-factor last year, however, finishing 10th and 20th. ... The World Finals Late Model field has averaged 79 cars in its four-year run. ... Saturday's program will once again be broadcast live on the Speed cable network, this year as a four-hour spectacle beginning at 8 p.m. Eastern. Eldora Speedway general manager and promoter Roger Slack, former promoter at Charlotte, will serve as a pit reporter.