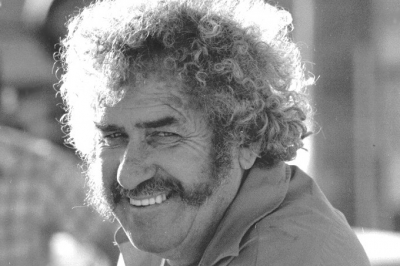 Kerr began his racing career late in life at the age of 38, but what he started in a small two-car garage located in a hollow south of Knoxville grew into one of the largest racing parts businesses known nationwide.

As a driver, Kerr won over 200 races on both dirt and paved short tracks throughout the Southeast and he was inducted into the Atomic Speedway Hall of Fame in 1992. He was an active driver well into his 60s, and in 1993 at the age of 63, Kerr was the NASCAR Weekly Racing Series Championship runner-up with 18 victories at 411 Motor Speedway in Seymour, Tenn.

At an age when most drivers were long retired, Kerr would get up every morning at 5 a.m. and go to the local gym to work out before opening up his shop at 8:30 a.m. Kerr had a unique victory celebration, as he would wave to the crowd in victory lane before dropping to the ground and pump out 20 pushups.

Kerr won his last race as a driver at Smoky Mountain Speedway in 1994, and then retired as a driver. He passed the driving chores on to his grandson Tommy Kerr, who himself has gone on to carry on the legacy of his beloved Pap Paw earning his own racing victories and championships.

When J.T. Kerr began his racing career he always took a few spare parts with him to the track. When another competitor needed a part, they always went to J.T. to see if he had what they needed. That started a new business because whenever J.T. needed a part for his race car, he bought two — one for his race car and one to sell to another competitor.

As it turned out, a lot of racers needed parts and J.T. Kerr Racing Equipment soon outgrew the small two-car garage, and a large warehouse sprung up in the hollow. Known as a “One-Stop Shop,” racing parts were being shipped out of this building every day to racers across the nation. Kerr also produced Stinger Race Cars with drivers such as Scott Sexton and Patrick Duggan among successful drivers in the Late Model cars.

Racers across the country knew they could call J.T. Kerr Racing Equipment to find the parts they needed and get it shipped to them the same day. J.T. Kerr was a self-made man with an aggressive work ethic. One could find him at the shop, at a race track, or at a trade show just about every day except Christmas.

Failing health forced Kerr to retire from actively running J.T. Kerr Racing Equipment in 2009, but he passed the business on to his granddaughter Lacretia and her husband Travis Holbert, who will continue to operate the family business.

Kerr was preceded in death by his wife of 58 years Imogene, and his oldest son Tommy, also known as “Big Un.” Kerr is survived by a son Roger, a daughter Cynthia, 3 grandchildren and 6 great-grandchildren.