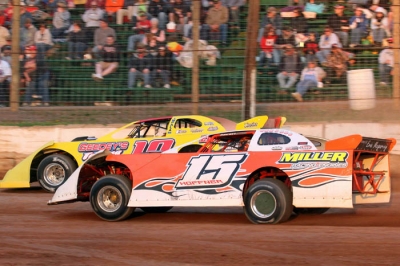 With 11 victories in weekly action at three different Central Pennsylvania dirt tracks this year, Turbotville, Pa., driver Luke Hoffner decided to reward himself for his successful season. That reward will come in the form of a trip south this weekend to drive Red Farmer’s Late Model in a pair of $2,000-to-win events at Talladega Short Track in Eastaboga, Ala. | Slideshow

Hoffner, who counts Farmer among his close friends, first got to know the legendary driver from Hueytown, Ala., nearly a decade ago when he let him drive his car in a race at Ace High Speedway (now Raceway 7) in Conneaut, Ohio. Since then, the two drivers have kept in touch.

Hoffner, 48, a 30-year veteran racer, even made a number of trips to Alabama to work as a member of Farmer’s crew during races like Talladega’s Ice Bowl. Eventually, Farmer eventually offered Hoffner the chance to drive his race car. This Oct. 21-22 weekend doubleheader will be Hoffner’s second appearance in Farmer’s equipment.

“In about ’02 or so Red came up and raced one of my cars at Ace High. We’ve been friends ever since,” Hoffner said of Farmer, an original member of the famed Alabama Gang and three-time champion of the NASCAR Late Model Sportsman Series (now Nationwide Series).

“We talk just about every week when he calls and asks me how I do (racing),” Hoffner said. “A while back he called me on the phone one day and asked me to come down there and race his car. We get along real good. It’s great, and I’m pretty excited go back down there again.”

Hoffner doesn’t mind making the 15-hour drive from Pennsylvania to Alabama. Not only does he enjoy racing with his good friend, but he also enjoys making laps around TST’s third-mile oval. He compares it to another one his favorite racetracks, the half-mile Hagerstown (Md.) Speedway.

“It’s awesome,” Hoffner said of TST. “I really love going down and racing there. It reminds me a lot of Hagerstown, just smaller. The clay gets really slick and black and real smooth.”

After posting one his career-best seasons, Hoffner has plenty of other reasons to be excited to head to Alabama for the weekend’s events, which are held in conjunction with the NASCAR race weekend at Talladega Super Speedway, just down the road from TST.

“It’s been really good actually. You can’t complain when you win one, so when you win 11 I guess you’ve had a good year,” Hoffner said. “I’ve got no complaints. We had a view carburetor issues during the summer, but we still were able to get a lot of good runs this year.”

The only thing lacking from Hoffner’s solid season in 2011 is a track championship. He came close with a pair of runner-up finishes in the points standings at Clinton County Speedway in Mackeyville, Pa., and Hummingbird Speedway in Falls Creek, Pa. But with 16 track titles at five different race tracks throughout his career, missing out on a championship this year wasn’t too much of a letdown for Hoffner.

“It was disappointing for my crew guys not to win one of the championships, but I’ve won 16 of them in the past, so it’s not that big of a deal to me anymore. I just like getting out there and winning races. That’s the fun part for me.”

Hoffner might not have won a championship this year and he’s had seasons when he won more races, but he still ranks 2011 as one of his best years in Late Mode racing. Hoffner says that winning at three different racetracks this year — Clinton County, Hummingbird and Thunder Mountain Speedway in Brookville, Pa. — was a big enough accomplishment to make this season a memorable one.

With more than 30 years of racing under his belt, Hoffner isn’t planning on quitting any time soon. In fact, he hopes to follow in the footsteps of Farmer by racing well into his older years.

“Red’s 79 and he’s still racing, so I’m gonna try for that,” Hoffner said. “Unless my health goes bad I wanna keep doing it. I love it.”