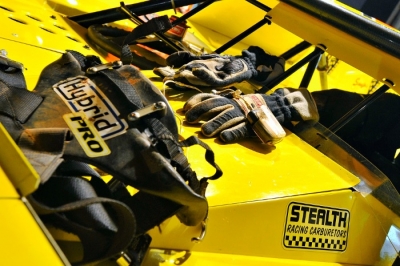 Ninety Late Models are entered in the season finale, which will decide the back-and-forth championship chase between series leader Jimmy Owens and Scott Bloomquist.

Weather forecasts called for rain to clear out later in the day, but off-and-on showers plagued the afternoon's modified preliminaries — which were rained out and Friday — and the modified program wasn't complete until after 8 p.m.

Late Models were scheduled to hit the track for practice by 9:15 p.m., but more rain returned about 9 p.m., delaying action before racing was postponed about 9:25 p.m.

While most of the Late Model teams are in K-C's pits behind turns one and two, more than 40 haulers — unable to get in the pits amid the modified haulers — will be pitting in the parking lot outside turn three. It's unclear how many of them may be able to move into the pits for Saturday's action, but many teams were unhappy pitting so far away from the racetrack without a view of the racing surface. ... Jimmy Owens leads Scott Bloomquist by 50 points entering the finale. ... Saturday's program is scheduled to include Late Model hot laps, time trials, heat races, consolation races, the modified feature, Late Model feature and the Late Model non-qualifiers' race. ... Among World of Outlaws Late Model Series regulars on hand are Josh Richards, Darrell Lanigan, Clint Smith, Shane Clanton and Chub Frank, the DTWC winner at K-C in 2007. ... Former DTWC Bart Hartman is piloting the Larry Shaw Race Cars modified, but isn't entered in the Late Model division. ... Illinois youngster Brandon Sheppard is making his first DTWC appearance. ... Chip Brindle and Kent Robinson are among other first-time entries.