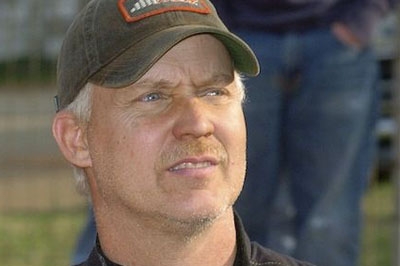 There are plenty of reasons for drivers to want to win this weekend’s 31st annual U. S. Steel Dirt Track World Championship presented by Sunoco. The race’s prestige and its $50,000 winner’s paycheck provide plenty of motivation for any driver planning to make the trip to K-C Raceway near Chillicothe, Ohio, for a chance to compete in the sport’s final crown jewel event of the season. | Complete DTWC coverage

But for one driver, a victory this weekend in the Lucas Oil Late Model Dirt Series event would mean so much more than just a handsome payday.

Dale McDowell of Chickamauga, Ga., lost his biggest fan on Sept. 30 when his mother Renva Dover died after battling a lengthy illness. For McDowell, being able to dedicate a Dirt Track World Championship victory to his mother would be a special way to end the Lucas Oil Series season.

“It’d be huge. It’d be really huge for my mother,” said McDowell, who along with his brother Shane, crew chief for the North Carolina-based Team Dillon Motorsports, has taken time off from racing at various points throughout the 2011 season to be at home caring for their mother.

“She was such a big supporter in mine and Shane’s racing,” McDowell added. “That was the hardest thing probably that I went through because she was at all of our races. From the time we were kids all the way up, she’s been a huge supporter. It’s really a dream of hers that we did what we did, Shane and myself, and doing what we’re doing. It’d be huge to win a big one here at the end of the year and dedicate it to her. It’d be really special.”

Along with affording him the opportunity to honor his mother, winning Saturday night’s 100-lap main event would also be a nice turnaround for McDowell who’s struggled at times this season as he’s spent time away from his race team in order to care for his mother.

“We haven’t had the year we wanted,” said McDowell, whose best DTWC finish is a third-place effort when the race was held at Bluegrass Speedway in Bardstown, Ky., in 2002. “I’ve experienced a lot with my mom being sick from this time last year. Shane and myself, she only had us two boys, so we were back and forth to Chattanooga a lot. So I haven’t really been able to spend the time that I needed to with the race team. We lost her this past week, so we’ll regroup and get our head back on straight. Maybe I can get focused a little more and start improving.”

While his focus has understandably been elsewhere at times over the past year, McDowell has still managed to post some solid runs. Although he’s winless in Lucas Oil action this season, he’s shown signs of improvement as of late, notching four runner-up finishes over the past two months on the tour.

His latest second-place effort came in Sunday’s Lucas Oil race at Rome (Ga.) Speedway. McDowell had a solid effort all race at his home-state track and held off a hard charge from fellow Georgian Clint Smith in the closing laps.

The spate of runner-up finish has provided McDowell a nice boost of momentum as he heads into the DTWC, which will serve as the final event of the season for the Lucas Oil tour.

“It helps,” McDowell said of the effect running well has had on his confidence. “Any time you can run up front against these guys you know you’ve done something. That helps any time you’re heading into a big race.”

McDowell almost added another runner-up finish to his tally in the September’s unsanctioned World 100 at Eldora Speedway in Rossburg, Ohio. McDowell, the 2005 winner of the prestigious event, ran second to Jimmy Owens of Newport, Tenn., for much of the second half of the $44,000-to-win race before getting caught in a tangle with Josh Richards of Shinnston, W.Va., on lap 82.

Owens, who currently leads the Lucas Oil Series points standings, went on to score his second World 100 victory after McDowell fell out and dropped to 18th in the final rundown. Owens dominated the majority of the race, but after jumping the cushion late in the race, damage to the right side of Owens’s car caused him to slow dramatically. While Owens was able to hold off Don O’Neal and Darrell Lanigan in the closing laps, McDowell felt that he would have been able to capitalize on the slowing Owens to score an upset victory if he had still been on the track.

“It was a letdown for us there at Eldora. We had a real good car,” McDowell said. “We didn’t have nothing for Jimmy, but we had a really good car. We had a solid second-place car, and with him having a problem I felt like that race was ours. But we had a problem before he did with a few laps to go there, so that was a disappointment.”

The disappointment stemming from Eldora has McDowell looking to bounce back with a strong run this weekend. But to make that happen, McDowell says, it’s going take a lot of work in the days leading up to the race by him and his Clint Bowyer Motorsports team.

“We’re really gonna have to change a few things with our program to get where we need to be,” he said. “Right now we’re just relying on certain type track conditions where we’re good. We’re working at it, we’re making gains and we’re learning a little bit, but we’re gonna have to have some luck go our way. We’re gonna make some changes. Hopefully we’ll hit on something and pull out a surprise here at the end of the year.”

Surprisingly for McDowell, the certain type of racetracks he’s relying on this year are the wet, hooked-up type racetracks. In years past, it has been the opposite situation. But he seems to have lost his prowess for slicker racetracks like those of K-C’s 3/8-mile oval, and he believes that could slow him down this weekend. Even so, McDowell still has optimism heading into the weekend.

“In years past, I loved slick racetracks,” he said. “With our program and what we are doing now, it seems like I’m struggling a little bit in the slick and I’m better in the mud. I know it’s going to be slick up there so we’re gonna have to go to work and get our program together. But we’re going and not giving up. We’re fighting, so who knows. We’re gonna give it our best.”

“That was the hardest thing probably that I went through because she was at all of our races. From the time we were kids all the way up, she’s been a huge supporter. It’s really a dream of hers that we did what we did, Shane and myself, and doing what we’re doing. It’d be huge to win a big one here at the end of the year and dedicate it to her. It’d be really special.”