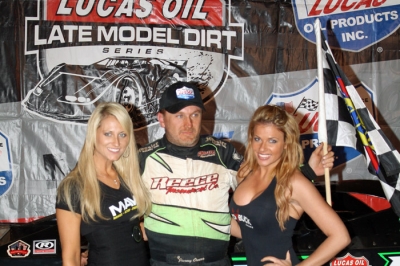 ROME, Ga. (Oct. 9) — Jimmy Owens doesn’t need to be reminded of who he’s battling for the Lucas Oil Late Model Dirt Series championship. He couldn’t forget even if he wanted to.

At every race there are comments from fans, questions from track announcers and all kinds of other inquiries that constantly remind him that he’s chasing one the sport’s most achieved and most iconic drivers. | Owens wins at Rome

It’s enough to cause strands of gray hair for the 39-year-old from Newport, Tenn., who admits that the pressure of attempting to knock two-time defending Lucas Oil Series champion and Hall-of-Famer Scott Bloomquist off his throne has proven to be stressful.

“I’d say it’s a lot more stressful for me because Scott’s the man to beat,” said Owens, who after winning Sunday’s race at Rome Speedway will carry a 50-point lead over Bloomquist of Mooresburg, Tenn., into next weekend’s series finale at the $50,000-to-win U.S. Steel Dirt Track World Championship presented by Sunoco.

“I have to hear it every day, in every interview, every time a fan walks up,” he added. “We just want to leave it alone and race. We don’t wanna worry about that stuff, but it keeps getting brought up. You can’t dodge it.”

A back-and-forth points battle hasn’t helped to lessen the stress level. The Tennesseans have swapped the top spot six times throughout the season.

Two years ago, Scott Bloomquist wrapped up his first Lucas Oil Series championship with a victory in the tour’s season-ending event at Rome Speedway. It was his only victory of the season. While he struggled to win races in 2009, his consistency was enough to keep him atop the standings nearly the entire year.

With one race remaining in the 2011 title chase, Bloomquist finds himself the exact opposite position. He’s had little trouble winning with a record-setting 15 victories on the year. Yet he’s in jeorpady of losing the title to Jimmy Owens due to his inconsistency.

“Sometimes there’s a lot of luck to it,” Bloomquist said after failing to finish Sunday’s race at Rome Speedway due to engine issues suffered while leading with 14 laps remaining. “The misfortune we’ve had with DNFs, which we’ve never had before, and now this, it’s just a different year. Stuff doesn’t usually happen like that, but for whatever reason it’s happened.”

Bloomquist still has a realistic shot at claiming his third consecutive title with a strong run and some good luck in the finale. But even if he’s unable to pull it off, he’ll still be happy with the success he’s had this year.

“Really, I’d much rather go into the winter knowing that my (car’s) as fast as it is,” he said. “They’re wasn’t no body that had a prayer tonight. To have that confidence going into the winter and building on my program for next year gives me more peace of mind than a championship would.

Casey Roberts of Toccoa, Ga., knows that switching to a new race car can lead to up-and-down performances. His first three races in his new Capital Race Car is a perfect example of that.

But things didn’t go quite as well for Roberts during the Lucas Oil tour’s doubleheader weekend at Dixie and Rome. Roberts missed the feature for Saturday’s Dixie Shootout, and nearly missed Sunday’s lineup at Rome after holding off Ray Cook for the final transfer spot in a consolation race.

“This racing, it’s the highest of highs and lowest of lows sometimes, but we knew that it would take some time to get adjusted and we’d be hit-and-miss hear off the bat,” said Roberts, whose Cushman Motorsports team still has a Victory Circle Race Car in its shop.

Locked in a tight points battle on the first-year Ultimate Super Late Model Series, Roberts, the four-time champion on the tour’s predecessor, the Southern All Star East Series, says he’s unsure of which of his cars he’ll use in the Ultimate tour’s finale at Cherokee Speedway in November.

“We’re gonna run this one some more in the next few weeks and see where we’re at on it,” said Roberts, who’s hoping to nab the Ultimate tour’s $15,000 champion’s payday. “We’ll run whichever one we feel the most comfortable with to try to win that deal.”