SELINSGROVE, Pa. (Oct. 8) — Rick Eckert returned to the track where he got his start in Late Model racing and came out the winner of the suspenseful 13th Annual Foss Jewelers Late Model Open Saturday night at Selinsgrove Speedway.

Eckert, of York, Pa., collected $5,000 for his fifth career victory at the track and first since 1987 in the 30-lap main event that wraps up the track's season.

Track champ Jeff Rine of Danville, Pa., was a distant second in the main event with Jamie Lathroum of Mechanicsville, Md., in third. Scott Haus of Hamburg, Pa., who started 15th, and hometown driver Jim Yoder rounded out the top five. New track record-holder Dan Stone of Thompson, Pa., led the first 21 laps, but a 10-cent bolt broke on the front end of his car, forcing him to retire.

The poles-starting Stone beat Eckert into the first turn for the early lead, setting a torrid pace asï¿½ Eckert gave chase. Fourth-starting Austin Hubbard took second on the third lap while Coleby Frye and the 11th-starting Rine were also among the top five early.

The first caution flag unfurled on lap eight when Tony Adams came to a stop in turn four. On the ensuing restart, Dylan Yoder stopped on the frontstretch after several cars made contact. When the race resumed, an intense battle for second unfolded between Hubbard and Eckert as Stone began to stretch his lead.

Ricky Elliot brought out the caution flag on lap 10 when his race car stopped in a cloud of smoke. At the same time, Hubbard brought his car to a stop and was able to rejoin on the back of the pack. On the lap-11 restart, Frye made a charge into second while Eckert raced in third.

A seven-car melee in turn two nearly blocked the track and brought out the red flag on lap 16. Under the stoppage, Frye withdrew from the race. On the lap-17 restart, Stone set the pace in front of Eckert, Rine and Lathroum.

On the 21st lap, Eckert attempted a pass by Stone entering turn one when Stone’s car drifted high and fell off the pace with front-end problems. Eckert inherited the lead at this point as Rine and Lathroum dueled for second the rest of the way.

Notes: Eckert's Bloomquist Race Car is powered by a Jay Dickens powerplant and sponsored by J&K Salvage. ... His victory was his second in three days; the World of Outlaws Late Model Series points leader won on the WoO circuit Thursday at Rolling Wheels Raceway Park in Elbridge, N.Y. ... Dan Stone lowered the track record in time trials with the first sub-19 second lap in track history. He posted a lap of 18.954 seconds (an average of 100 mph). ... Among drivers failing to make the main event: Gary Beward, Tim Wilson and Al Shawver Jr. ... The event was rained out Aug. 6 and Aug. 27. ... Track champions A.J. Hoffman (pro stock) and Bob Bussey (roadrunner) won their ninth and sixth races of the season on the undercard. ... DH&L Fire Co. will hold the third annual race car flea market on the speedway grounds beginning 7 a.m. Oct. 29. ... Selinsgrove's awards banquet is scheduled for Nov. 12, at the Sheraton Harrisburg-Hershey Hotel. 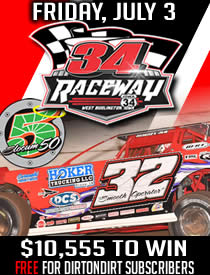