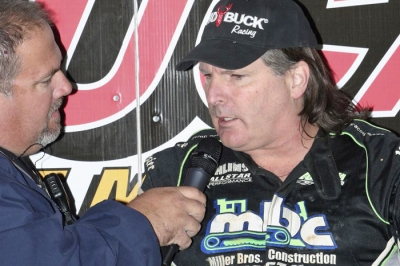 The fourth-starting Owens earned $7,000 for the victory as he pulled away to win by more than a straightaway at the half-mile sprint-car stronghold. | Complete Knoxville coverage

The low-running Lanigan, who started outside the front row, held off sixth-starting Austin Hubbard to get second while Brian Birkhofer was just behind in fourth.

Two cautions slowed the action. The first appeared on the seventh lap when third-running Steve Francis slowed on the frontstretch. Jason Rauen spun back in the pack for a lap-13 yellow.

Chad Simpson starts on the pole of the main event (lineup at upper right); the feature has an eight-car inversion based on qualifying times, putting fast qualifier Scott Bloomquist outside the fourth row. ... Among drivers done for the night (and working on banged-up cars) are those in the second-heat skirmish in turn two: Bub McCool, Mike Marlar, Steve Casebolt and Matt Furman. ... Don O'Neal also scratched from the C-Main after damaging the right-front of his car in a tangle with Jason Feger in the fifth heat. ... Jason Utter, who got into the outside guardrail hard after losing the lead to Jimmy Mars in the fifth heat, is gingerly holding his right arm; he hopes it's only bruised and not broken (listen to audio above). ... Brian Birkhofer was working on his carburetor after his heat race victory, which puts him starting in the fourth row of the main event. "I'm just making sure it's got enough gas for this big half-mile," Birkhofer cracked. Said fellow driver John Blankenship, eavesdropping from behind: "It looked like it had plenty of power to me." ... Chris Simpson, runner-up in the first heat, is using a rear end borrowed from fellow Longhorn Chassis driver Brad Neat after finding problems with his car earlier this afternoon (listen to audio above). ... Chris Spieker won the C-main and transfers to the rear of the B-main. ... Jason Feger won the B-main to lead four transferrees to the main event.

Fourth-starting Jimmy Mars overtook front-row starter Jason Utter on the eighth lap, and Utter's race came to an abrupt end when he got into the guardrail between turns one and two to bring out a red flag. Mars held on the final four laps with seventh-starting Dale McDowell and ninth-starting Darrell Lanigan hot on his heels. McDowell turned back Lanigan's high-side charge while Jason Rauen was further back for the final transfer spot.

Becoming the third driver to overcome the 10-car inversion, Steve Francis rallied to cut down John Blankenship's straightaway lead for a late-race pass in the fourth 12-lapper. Blankenship, who started fourth and took the early lead from Dan Schlieper, was second with eighth-starting Brian Shirley rallying into third. Schlieper got the final transfer spot while Brady Smith, who held the fourth spot for several laps, nearly got sideways in turn four on the eighth lap to lose a position, and then lost the fifth spot to Rob Moss at the checkers.

Tenth-starting Austin Hubbard rallied for a last-lap pass of Billy Moyer to win the third prelim. The fifth-starting Moyer overtook fellow third-row starter Kent Robinson on the fourth lap and led until Hubbard charged past on the backstretch on the final lap. Robinson jumped into the lead on the first lap, slipping past Jack Sullivan at the start-finish line, but he and Sullivan faded midway through the race. Hubbard took the second spot from Scott James on the seventh lap and tracked down Moyer while James and Jimmy Owens wrapped up the final transfer spots in the caution-free prelim.

Brian Birkhofer, scheduled to start 10th, took advantage of a better starting spot after a first-lap wreck and blitzed into the lead on the first lap, building a full straightaway advantage before the halfway mark and cruising to an easy 12-lap victory. Will Vaught took second from Shannon Babb on the seventh lap and got the runner-up spot while Babb and Eric Wells (who inherited the pole) got the other two transfer spots. A red flag appeared on the initial start when a scamble on the first lap exiting turn two involved more than half the field as McCool got sideways. McCool was knocked out of the race while polesitter John Duty and Steve Casebolt had to restart on the rear.

Fast qualifier Scott Bloomquist overcame the 10-car inversion, outrunning home-state brothers Chris and Chad Simpson for a victory in the ifrst heat. Also transferring to the main event was Brad Neat in fourth while Jared Landers in fifth will go to the B-main. Bloomquist took the lead from Chris Simpson on the 10th of 12 laps. Poleisitter Chris Spieker got into the wall on the second lap and was scored last.

With the 10-car inversion for heat races, Chris Spieker, John Duty, Jeremiah Hurst, Kerry Hansen and Jill George are scheduled to start on the pole.

Sixty-four teams signed in for the event that's being sanctioned by the Lucas Oil Late Model Dirt Series for the first time since 2006.

The event follows a unique format with two complete programs which allows drivers to accrue points that will set the starting lineup for Saturday's main event.

The track is doing live video of tonight's racing. ... Time trials started about 7:45 p.m. ... Hot laps were scheduled for 6:45 p.m. but got started about a half-hour late to complete track prep. ... It was a blustery but clear afternoon across Iowa. The winds began to die down as action got rolling. ... Billy Moyer of Batesville, Ark., who scored an unprecedented sweep of all three races last year, comes to his native state fresh off a $20,011 victory in last weekend's Magnolia State 100 at Columbus (Miss.) Speedway. ... With Josh Richards having duties on the NASCAR Camping World Truck Series this weekend at Kentucky Speedway, Darrell Lanigan of Union, Ky., is piloting the Rocket Chassis house car, which is sporting black sheetmetal. It's a new car. ... Don O'Neal of Martinsville, Ind., is piloting the Illinois-based Moring Motorsports car, which has yellow sidepanels instead of white as it's carried since O'Neal began driving the car part time in the spring of 2010. ... Brian Harris of Davenport, Iowa, is driving the No. 27H Diercks Motorsports car that Darren Miller entered in this event last season. ... This marks the third time in the race's eight-year history its been sanctioned. It was sanctioned by the Xtreme DirtCar Series in 2004 and the Lucas Oil Series in 2006. ... Jason Feger and Tim Lance were among drivers not pre-entered who are on hand. The event limits the field to 66 cars and rejected entries until it was clear there'd be room for last-minute additions. ... Programs are Late Models-only the first two nights; modifieds run as a support class Saturday.