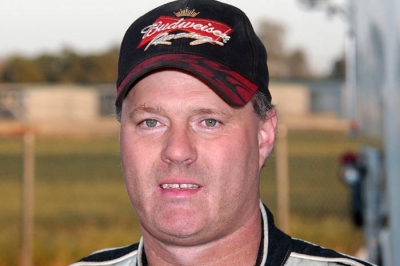 Richard Papenhausen knows that it takes a lot of work to win races, and last weekend was a perfect example of that.

After blowing the engine in his Rocket Chassis during Friday night's time trials for Saturday night's Northwest I-5 DIRTcar Late Model Series season finale at Southern Oregon Speedway in Medford, Ore., Papenhausen and his crew made the 362-mile drive back to his uncle Dave’s shop in Petaluma, Calif., where his race car is housed.

After arriving back at the shop early Saturday morning, Papenhausen and crew went straight to work swapping engines.

“We blew an engine in qualifying on Friday night, but we didn’t have a spare,” Papenhausen said. “We hauled the car all the way back late Friday night, arriving in the wee hours of Saturday morning. The crew said if we get our spare engine in before noon, we were heading back to Oregon.”

The crew did meet the noon deadline, and made it back to Medford Saturday night in time for Papenhausen to start from the tail of a qualifying race. The team’s hard work and long hours on the road and in the shop paid off as Papenhausen advanced from last to first in the qualifying race to earn a second-row starting spot in the main event.

Papenhausen then capped off the busy weekend by overtaking Rob Mayea of Bend, Ore., for the lead on lap 13 on his way to scoring a $2,500 victory in the 60-lap main event.

“I look forward to racing in the big shows. They make you want to go the extra mile,” said Papenhausen, whose team traveled a total of 1,700 miles on the weekend.

Papenhausen has another busy weekend coming up as he prepares to make a two-division attack on the Budweiser Fall Classic, a two-night event that includes separeate $3,000-to-win features for the Western Allstars DIRTCar Late Model Series at Antioch (Calif.) Speedway Friday night and Merced (Calif.) Raceway Saturday night. Papenhausen will drive both his Late Model and a DIRTcar Modified Stock Car in what is one of the West’s biggest events of the season.

“It’s not too hard for me to run two different cars in one night,” Papenhausen said of this weekend’s task. “The differences are drastic. The Late Model stock cars have a lot of horsepower and big tires; the modified stock cars have a decent amount of horsepower with small tires. You have to drive them differently, but I’ve been at it (driving both types of cars) for 10 years now.”

Saturday night at Antioch Speedway, Papenhausen expects a good run. Merced, however, is an untested battleground since the Western All Stars have yet to visit the Merced.

“I seem to have some good luck at Antioch,” Papenhausen said. “There are a lot of fast drivers there. The track has more than one groove, and guys are aggressive. Things happen fast on the track. Double file restarts make it interesting, too.”

For standout west coast drivers like Bobby Hogge IV, this weekend’s Budweiser Fall Classic doubleheader is an event they prepare for all year.

“I love the big events,” Hogge of Salinas, Calif. said. “There’s a lot up for grabs this weekend.”

Indeed, there will be a large sum of money on the line over the two nights of racing, which will include separate $3,000-to-win Western Allstars DIRTcar Late Model Series shows at Antioch Speedway Friday night and Merced Speedway Saturday night.

In addition, many drivers, including Hogge, will pull double-duty both nights, competing in each night’s $2,000-to-win event for the DIRTcar Modified Stock Car support division. A driver pulling off a clean sweep of the weekend’s four main events would walk away with a total $10,000 payday.

For Hogge, that means long hours of preparation and hoping that everything goes like clockwork at the track.

“We wait for big weekends like this all year long,” Hogge said. “When there’s $2,000 to win or more for the late models, we’re there. Add in the modifieds, and it gets better.”

Can Hogge pull off the improbable sweep and win four main events at two tracks, in two separate divisions, in two days?

“If there are no major problems, there is a possibility,” Hogge said with optimism. “If something has to be fixed or repaired, it’s usually down to me and my dad (Bobby Hogge III). If I’m racing the other car, then he’s got to figure out how to get the work done.

“It should be a good show. The competition will be at its best.”

Hogge, the 2009 series champion, has one victory in four events this year on the Western Allstars series, which is back after a hiatus in 2010. ... This weekend’s doubleheader will be the tour’s first races sicne June. Three events in July and two in August were cancelled. ... After this weekend, the tour will have two events remaining this year’s schedule, a doubleheader weekend at Chowchilla, Calif., Oct. 15-16. ... Jeremy Shank of Salem, Ore., survived a lap-one crash at Southern Oregon that eliminated Trevor Glaser and Trent Elliott, rallying to finish fourth and secure his second straight series championship. Shank is the third driver to earn multiple series championships, joining Rob Mayea ('04 and '08) and Trevor Glaser ('05-'07). ... Sponsors of the event include: Jim’s Auto Body of Antioch, Concord and Walnut Creek, 8th Amendment Bail Bonds, Sign Me Up Graphix, Pro Motorsports, Schaeffer Synthetic Racing Oil, Diversity Driving School of Antioch, Mike’s Radiator and Muffler, Sound Encounters and Volvo Rents of Merced.