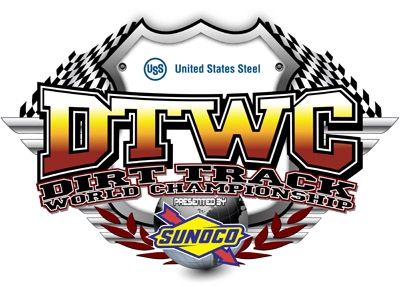 "We are very excited and honored to have U. S. Steel come on board for the DTWC," series director Ritchie Lewis said in a news release. "To have an opportunity to be associated with a great company of this size and magnitude is really exciting. To have a great partner as the title sponsor of this huge event will just make the whole weekend that much bigger."

The event, which returned to the track owned by Jeff and Vickie Schrader after being held last season at West Virginia Motor Speedway, includes the $3,000-to-win Jim Dunn non-qualifiers' race for the Late Models along with a $3,000-to-win modified feature.

"U.S. Steel is pleased to be a sponsor of the Dirt Track World Championship," said Scott Coleman, general manager for U. S. Steel Great Lakes Works. "There are many great partners who put on a fantastic series for the fans and we are proud to be a part of that."

It was Frank's third feature win of 2011 but definitely his most important. It marked his richest checkered flag since a $20,000 World of Outlaws Late Model Series victory in August 2009 at Ohio's K-C Raceway.

"We needed it real bad," said Frank, who fields his own race team with assistance from a list of sponsors that includes Corry Rubber, Hino Toyota and Horton Equipment. "Property taxes are due this week, bills need to be paid ... a $13,000 win definitely helps in that department."

Frank certainly earned every cent of his five-figure payoff, turning back challenges from Rick Eckert and Dan Stone to register his fourth career ULMS victory. He started fourth and grabbed the lead from his cousin and former crew chief Boom Briggs on lap five, but both Eckert and Stone got close enough to threaten him. Stone even nosed ahead briefly to lead lap 36. The triumph sent Frank home with a big smile on his face.

"It felt good," Frank said. "Things have been better the last few weeks. We made some changes on the car and it's good, and the Roush Yates motor definitely has helped it.

"And my hand's really not bothering me too bad," Frank added, alluding to the broken right thumb injured in a racing accident Sept. 10. "It's not healed up yet, but it's just kind of sore like a toothache right now. The brace I'm using now when I drive has definitely made a difference." — From team reports

Jim McDuffie of Meridian, Miss., clinched his second NeSmith Chevrolet Weekly Racing Series West Region Championship on Saturday at Drew County Speedway in Monticello, Ark. McDuffie dropped out of the Crate Late Model event but clinched the title as his nearest challenger Duke Palasini of Leland, Miss., failed to get a victory that would've extended the title chase.

With two laps to go in the race, it appeared that the points battle would continue into the 27th and final week as Palasini was leading the race. But Palasini was passed for the lead with a lap and a half to go by John Polasini, who went on to take his first win of the season.

"I was disappointed that we had to drop out of the race and since we had a five-hour ride ahead of us to get home, I didn't even watch the rest of the race," McDuffie said.ï¿½ "I knew Palasini was leading and I figured we'd be going back to Drew County Speedway to decide it next weekend. When the race was over, one of my guys came over with a big smile, shook my hand and said we won it."

Going into the weekend's only points race, McDuffie held a one-point lead on Palasini, and both drivers had to win to improve in the points. If McDuffie won the race, he would clinch the title.

Palasini had to win this race, and one next week combined with McDuffie not winning to take the championship.

McDuffie wasn't on the track at the finish because of a broken left-rear suspension.

"When I was racing side-by-side with Palasini, I hit a hole in the race track, and my car just doesn't like holes," McDuffie said. "The car came completely off the ground, landed, and broke something in the left-rear.ï¿½ We then hit one of the skidder tires on the inside of the track, and that bent the left-front spindle and wheel. I couldn't drive it anymore, and I had nothing to gain, so I parked it."

But his long drive back to Mississippi was made more pleasant by news of his second regional title.

"We are proud of the season we had to have worked hard and won as many races as we did," McDuffie said. "The thing we're most proud of is that we spread it around and won races at several different tracks. I'm glad we got the chance to come to Drew County Speedway and race with Duke.ï¿½ I'm really impressed with him and the way he races. I'm also impressed with Drew County Speedway. It's a really nice facility and everyone there made us feel welcome."