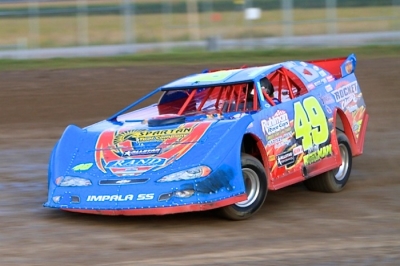 CHATHAM, Ontario (Sept. 24) – When Brian Ruhlman rolled into South Buxton Raceway by himself Saturday night, the Clarklake, Mich., driver was overwhelmed by the number by people who offered to help him.

He then went out on the track and helped himself to a sweep of the UMP Late Model and modified main events during the seventh annual Canadian Fall Shootout. Ruhlman, who led all 30 laps to win his first Late Model Shootout, earned a total of $5,000 for his efforts. | Slideshow

“This is just one of those places where I feel comfortable running,” Ruhlman said of his success on South Buxton’s 3/8mile D-shape clay track. “It reminds me of places where I grew driving, tracks like Stateline and Erie, the way you have to hit your marks every lap … just the kind of track that suits my driving.”

Ruhlman pulled off Saturday’s sweep despite travelling solo to South Buxton after his lone crew member was turned back at the border in Windsor.

“We had to go back to Detroit and wait for someone to pick him up, then I came here by myself,” Ruhlman said.

But when he got to South Buxton, he found plenty of willing bodies to help him with his two cars.

“That’s the nice thing about this place, everybody helps out,” he said. “If you need a hand, there’s more than enough people to help out.”

Ruhlman dominated in leading every lap of the the Late Model Shootout, never giving other competitors a chance to chase him down.

“I think we were as good as we’ve always been here, it’s just that everything went our way this time,” said Ruhlman, who finished second three times, third, fourth and sixth in the first six Shootouts held. “It’s good to win finally both, I’ve been trying to do it every year.”

He finished second to Andrew Reaume in the last two Shootouts but the Blenheim native was never able to make up any ground from his third-row starting position and finished third.

Chatham’s Brad Authier, who won South Buxton’s Late Model championship race two weeks ago, made a late-race pass to move into second but only had two laps to try and catch Ruhlman.

“I needed a caution,” Authier said. “There’s no question in my mind I had a fast enough car … I think I could have caught him.”

Chris Ross of Charing Cross, the 2008 Shootout champ, finished fourth, as like Reaume, could not get a run on the lead cars.

Eric Spangler, of Lake City, Mich., rounded out the top five while Jamie Zidar faded to a sixth-place finish with his injured car.