From team, series and correspondent reports 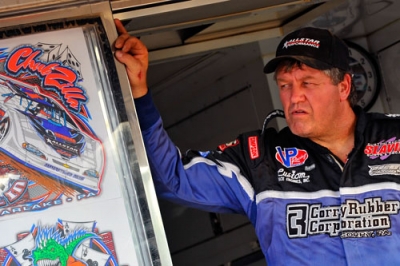 Chub Frank of Bear Lake, Pa., hopes the worst of a broken right thumb is behind him at McKean County Raceway for three nights of racing on the Northern Tier United Late Model Series.

Frank broke the thumb Sept. 10 in a World 100 heat race at Ohio's Eldora Speedway, aggravated it last Friday in World of Outlaws Late Model Series action at Tri-City Raceway in Pontoon Beach, Ill., but felt comfortable enough with it Saturday at I-55 Raceway to score a solid fourth-place finish.

At I-55, where the 49-year-old Frank scored his fifth top-five finish of the season with the World of Outlaws, he decided to trade in a small thumb brace doctors provided him for racing and instead wear a larger apparatus intended for non-racing use. The switch paid off.

"I'm glad I tried that brace I did," said Frank, who slipped his racing glove over the brace when he climbed into the cockpit at I-55. "It was a lot better. I had a lot more confidence with that one on.

"I definitely could still feel it. But it wasn't too bad. When you're out there, you're racin'."

Frank, his first feature start in a new Roush Yates Chevrolet engine, was glad to record his best series finish since May.

"We still could never get the car to turn where we needed it to turn, but it was better. (Feature winner) Josh (Richards) helped me out a little bit and got us going in the right direction."

Frank, fifth in WoO standings with five events remaining, will race close to home Thursday through Saturday in East Smethport, Pa. The ULMS action is made up of a King of the Hill Challenge on Thursday, the $4,000-to-win Dave Lundgren Memorial on Friday and the $13,000-to-win Priority Care RaceFAN 50 on Saturday. — From team reports

Another Texas victory for Moore

The victory was Moore's second straight September victory at TMS and gave him five O'Reilly Southern United Professional Racing victories this season. Starting in the fifth row, Moore was up to second when leader Kevin Sitton took an off-track excursion through the infield just past the halfway point after struggling amid slower traffic. Moore took command and won by a full straightaway at the 4/10-mile oval in the shadow of one of NASCAR's major venues.

"It was a lot of hard work tonight," Moore said. "We had to start in the back of our heat race and the track was kind of one grooved, so I didn't get the passing points I needed to start further up in the main. Starting in the fifth row I had my work cut out for me. I honestly didn't think we'd be able to get up through there. I love this place. I wish we would come here more often. It's real fun to race on."

Sitton's miscue helped Moore, but the winner thought he was in good shape either way.

"I think I had something for Kevin even before he got hung up with a lapped," Moore said. "I watched him and (Timothy) Culp up there battling. It was early in the race and I was just trying to save my tires. When I saw him get tangled up with that lapped car I went full speed ahead. Once I got the lead I went all out the rest of the way." — J.M. Hallas

Ray Cook struggled Sept. 16-18 on the Lucas Oil Late Model Dirt Series circuit, but he had a bright spot during the Virginia racing weekend with his second straight victory on the Carolina Clash Super Late Model Series.

Cook was 14th Friday in Lucas Oil action at Winchester (Va.) Speedway and 20th Sunday at Virginia Motor Speedway in Jamaica, Va. With Saturday's action at VMS postponed a day, Cook slipped down to Wythe Raceway in Rural Retreat, Va., for a 40-lap Carolina Clash victory worth $4,000.

Cook, who also won on the regional circuit Sept. 10 at Volunteer Speedway in Bulls Gap, Tenn., lowered the track record at the half-mile oval and led flag-to-flag in the feature.

"That win at Wythe was a big one for our team, especially how the rest of the weekend shook out for us," said Cook, who has six victories overall in 2011. "Our car was excellent at Wythe all night, but we just missed a little something at Winchester and Virginia Motor. It seems like we do all of the right things in some of these non-Lucas Oil races, but then in the series events, we do the wrong thing to the car at the wrong time. We will keep working hard at the shop and hope to make the right decisions this weekend at Brownstown."

With Sept. 24 wrapping up the Fastrak Southeast-Mideast touring schedule, the title chase could come down to the final lap at Wythe Raceway in Rural Retreat, Va., between hometown driver and points leader Brandon Umberger and second-running David Smith of Inman, S.C.

Smith was on top of the points just a week ago, but a 14th-place finish at Cleveland County Speedway in Lawndale, N.C. — coupled with Umberger's runner-up showing — gave Umberger a four-point edge heading into the finale, a makeup of a Sept. 3 rainout.

It should be quite a showdown with Umberger, racing at a home track where he's won frequently, and Smith, a three-time series winner this season at the scenic half-mile circuit.

"I dug myself a hole at Cleveland County," Smith said. "I made a mistake on the car that showed up in the feature. But I am excited about going to Wythe. It looks like we will finally have some good weather.

"My strategy is to win the race and let the points go how they go. We aren't giving up by any means. We are going to do all we can, but it will probably take Brandon making a mistake or having trouble. He is very good at Wythe, too."

Umberger hopes he can hold on to his narrow margin.

"We are gonna run what we always run and show up at the track looking to win," he said. "I know David will be one of the guys I will have to outrun to win the race.

"He's won three Fastrak races there this year. I know we have had the car to win the least few races, there but our results haven't shown that. We are just gonna go after it and see where we end up."