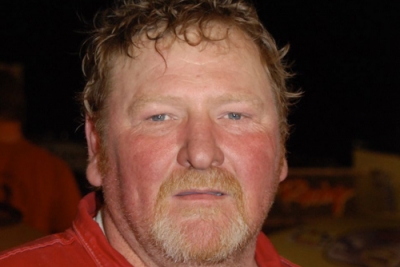 The Comp Cams Super Dirt Series is heading to Terry Henson's two favorite dirt tracks in wrapping up its season in coming weeks, and tour director Chris Ellis will miss seeing the always-upbeat Arkansas racer at I-30 Speedway and Riverside International Speedway.

Henson, a frequent competitor on Dirt Late Model tours that held events in Arkansas, died Thursday morning of an apparent heart attack, according to his daughter Amber Stewart. Henson, a master plumber, was 51.

"He's going to be missed, without a doubt," said Ellis, who said the series plans "In Memory of U2" stickers, a moment of silence and a lineup in missing-man formation to honor the North Little Rock, Ark., driver at the next series event.

"He was kind of a happy-go-lucky guy, always friendly, enjoyed the people ... he and (wife) Nita were always good to be around," said Ellis, who first got to know the couple while running Beebe (Ark.) Speedway.

Ellis remembers the redhead racer as helpful to fellow drivers, including one occasion when fellow Arkansas driver Wesley Crutchfield was in an accident and Henson let his own race car sit idle while pitching in to help.

"There were all kinds of situations where he'd help people work on their stuff or loan them parts," Ellis said. "He was just a friendly guy who got along with everybody and had a good time."

A 30-year dirt racing veteran, Henson's No. U2 was a full- or part-time entrant over the past dozen seasons with the Comp Cams Super Dirt Series, MARS DIRTcar Series, Arkansas Motorsports Professionals tour and O'Reilly Southern United Professional Racing tour. He was also a regular competitor at I-30 Speedway near Little Rock, Riverside in West Memphis, Beebe and other Arkansas ovals along with long-time friend and racing partner Johnny Nelson.

Henson began competing in pure stocks at I-30 Speedway 30 years ago before moving into the Late Model division by the late 1980s. His first Late Model championship came in 1994 at Lake Ouachita Speedway in Mount Ida, Ark., before he moved on to compete with a variety of series. He won the Most Improved Driver award with MARS in 2000 and finished fourth in AMP points in 2007, the first of two series seasons.

Henson, who would've turned 52 on Friday, is survived by his wife Nita, his daughter Amber and her husband, Mark Stewart. — Todd Turner

JACKSON 100 GETS PURSE BOOST: The 32nd annual Jackson 100 features a boosted purse with every feature starter of the Sept. 23-24 Lucas Oil Late Model Dirt Series event earning at least $1,200, Brownstown Speedway has announced. Track promoter Tim Keithley said $5,000 was added to the race purse. "The money will be spread through the field and not added to the top," Keithley said. "Hopefully this will attract more cars to the Jackson." The race format calls for Red Buck Cigar Time Trials on Friday night along with a full racing program for Brownstown's pure stocks, bombers and super stocks. Saturday's program includes Lucas Oil Series heat races, consolations and the 100-lap feature. — From track reports

UFO SERIES SANCTIONING SEMI-LATE DIVISION: The UFO Race Championship Series plans to sanction a Semi-Late Model division on Oct. 21-22 at Hesston (Pa.) Speedway for its season-ending Ultimate. Limited, Crate and steel-block Late Models will be eligible to compete in the Semi-Late division with weight and spoiler variances for different motor combinations. For specific rules, check the UFO website. Hesston's main event will pay $2,000-to-win and $200-to-start for the 44-lapper. The UFO tour plans to add a Semi-Late division to select racing programs on the 2012 schedule. — From series reports

UNZICKER STRETCHES LEAD IN UMP CHASE: Riding a four-race winning streak, Ryan Unzicker of El Paso, Ill., has stretched his lead in UMP DIRTcar points while chasing the $20,000 championship. Unzicker, who won last weekend at Kankakee County and La Salle Speedways in his home state, leads second-place Rusty Schlenk of Weston, Ohio, by 33 points up from a five-point lead a week earlier. Third-place Jon Henry of Ada, Ohio, is third, 61 points behind. Three straight nights of UMP action at Tri-City Speedway in Pontoon Beach, Ill., will likely play a part as the points chase continues with Unzicker and Henry among the expected entries. UMP points count through the Oct. 7-8 UMP Nationals at Eldora Speedway in Rossburg, Ohio. — From staff reports

FOUR HAVE HOPES FOR ULMA TITLE: Four drivers are still in the hunt for the United Late Model Association weekly championship with just three points events remaining. Jake Griffin, a 12-year-old from Quincy, Ill., has an eight-point lead over former champion Jason Bodenhamer of Centerview, Mo., but Bodenhamer would need three victories to overtake Griffin with the Missouri-based organization. Other drivers with a chance to overtake Griffin are Rylan Long of Lockwood, Mo., and Steve Clancy of Odessa, Mo. Long has yet to accumulate the maximum 15 starts and Clancy would also need a three-race sweep. Remaining races are Sept. 24 and Oct. 2 at 24 Raceway in Moberly, MO., and Oct. 1 at Central Missouri Speedway in Warrensburg. — Sam Stoecklin

PIKE COUNTY SPEEDWAY REOPENS: After closing its doors in May, Pike County Speedway in Magnolia, Miss., is back in operation under new promoter Jonathan Dunning. The street stock team owner turned promoter hosted his first event at the 3/8-mile oval Sept. 17 with 87 total race cars, including eight Crate Late Models. The track plans to continue weekly events before hosting the annual Jambalaya 100 in mid-November, Dunning said. Details on divisions and payouts for the traditional season-ending event will be announced. Pike County also announced plans to sanction its Crate division with the NeSmith Chevrolet Weekly Racing Series beginning in 2012. — Joshua Joiner

THUNDERBIRD BONUS DOUBLED: With a new bonus added for the inaugural Topless Thunderfest at Thunderbird Speedway, one driver could win as much as $6,500 this weekend at the half-mile Muskogee, Okla., oval, officials announced this week. The Sept. 23-24 action sanctioned by MARS and NCRA pays $2,500-to-win Friday and $3,000-to-win Saturday. A $500 bonus for sweeping the events has been doubled to $1,000 with just-announced sponsorship from Charlie's Chicken, a long-time supporter of Dirt Late Model racing. — David Smith Jr.

KNOXVILLE HOSTING DIRT LATE MODEL FORUM: The public is invited to a Dirt Late Model forum Oct. 1 at the National Sprint Car Museum on the grounds of Knoxville Raceway. Two related programs will be presented at the 90-minute gathering beginning 3 p.m. Saturday before the last of three nights of action at the eighth annual Lucas Oil Late Model Knoxville Nationals. The first presentation, "Tracing the Evolution of the Dirt Late Model," will be led by the National Dirt Late Model Hall of Fame's Bob Markos and his son Bobby. The second discussion, moderated by Lee Ackerman of MidwestRacingArchives.com, will focus on "When was the Golden Age of Dirt Late Model Racing?" For more information, call (800) 874-4488. — Tom Schmeh