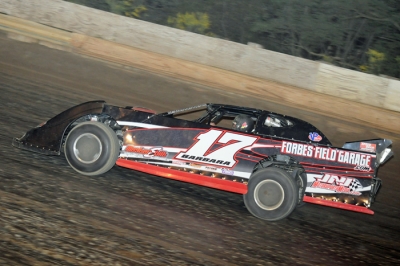 Keith Barbara had plenty of reasons to be discouraged after getting caught in a wreck on the first lap of his heat race for Friday night’s Pittsburgher tuneup event at Pittsburgh's Pennsylvania Motor Speedway. Forced to start at the tail of a consolation race, Barbara’s chances of winning the night’s $2,000-to-win, UFO Race Championship and Northern Tier United Late Model Series co-sanctioned feature were all but over. | Barbara wins Pittsburgher

But rather than call it a night, the South Park, Pa., driver and his Forbes Field Motorsports race team turned the setback into a positive. They decided to use the consolation race as a test session in order to try some setup adjustments that could possibly help him in Saturday night’s $7,000-to-win Pittsburgher finale.

The setup changes turned out to be just what Barbara needed. Not only did they help him advance to third in the consolation race and earn a starting spot in Friday’s main event, but they were also key for Barbara on Saturday night, when he moved by Davey Johnson late in the 66-lap feature on his way to scoring the first Pittsburgher victory of his career.

“My MasterSbilt car was probably one of the best cars I’ve had at Pittsburgh in a long, long time,” said Barbara, who advanced from 23rd to 11th in Friday’s caution-free feature before winning on Saturday. “We were all kinda down after that heat race, but we made some changes there in the B-main that we wouldn’t normally do there. It really brought the car to life and made our confidence a lot higher. Doing that, it really paid off for us there Saturday.”

That payoff not only matched Barbara’s richest triumph in the 2008 Yankee Doodle 50 at Central Pennsylvania Speedway, but it also provided some personal fulfillment for Barbara, who finally captured a Pittsburgher victory after more than a decade of trying.

“It’s one of those races I always wanted to win,” said Barbara, the 2001 PPMS Late Model champion whose previous best Pittsburgher finish was fourth in 2010. “We've done a lot of racing and to finally win this one, it feels pretty good.ï¿½ We’ve been pretty there a long time and won races there, but just never got that one — until now.”

The victory also ended a season-long drought for Barbara, who has struggled to adjust to a new MasterSbilt Race Car he switched to at the end of 2010. Winless until Saturday’s victory, Barbara always had faith in the new car, and knew he and his team needed to keep working hard to improve their race car’s setup.

“We knew we had a good car, we just had to keep working on it, especially in slicker condition and in the longer-distance races,” Barbara said. “We’ve been pretty good all year in the shorter races, but we tend to fall off a bit in them longer runs it seemed like. But we kept plugging away at it and finally got things working.”

Unfortunately for Barbara, the dry spell to start the year put him behind in the UFO points race. After coming up just short in last year’s UFO final standings (he finished second to Chad McClellan by one point), he had hoped to contend for this year’s championship. But the prolonged adjustment to the new car and a few mechanical woes along the way have put the championship nearly out of reach.

Currently third in the standings behind Devin Friese and Jared Miley, Barbara plans to finish out the remainder of the season on the tour. But after following the series for the past four seasons, and the now-defunct Mid-Atlantic Championship Series before that, Barbara’s considering taking a break from points racing in 2012.

“Points racing is something I’ve always done in previous years, but we’re talking now that maybe we’ll just try something different next year,” Barbara said. “We’ve done points racing so much of the past 10 years, it’s really getting to a point where we’re we getting burned out on it.”

While he may take a break from chasing points next year, don’t expect Barbara to slow down much. He hopes to take advantage of a more flexible schedule to do more traveling and enter more major events.

Barbara hopes to get a head start on that traveling at the end of this year by making a trip to Charlotte for the World of Outlaws World Finals in November.

“If we could maybe keep things rolling and pick up a few more wins, we might try to head down (to Charlotte) for the World Finals,” Barbara said. “It’s really tough right now with the money, but if we can keep the funds up we’d like to get down there and then start next year planning on branching out as much as we can afford.”

“We've done a lot of racing and to finally win (the Pittsburgher), it feels pretty good. We’ve been pretty there a long time and won races there, but just never got that one — until now.”