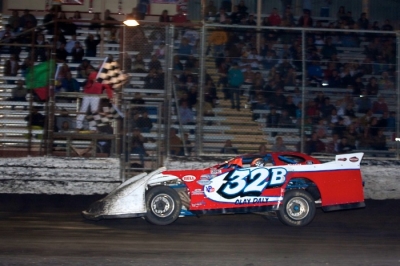 The 22-year-old from Hollister, Calif., started from the pole and controlled the majority of the race before a caution with four laps remaining gave second-running Jeff Decker of Morgan Hill, a chance to challenge for the win. But Daly pulled away after the restart on his way to scoring the first West Coast Shootout victory of his career.

“I didn’t want to see another caution,” Daly, who recorded his fourth special event victory of 2011, said of the late restart. “We had a good car and it feels great to finally get a West Coast Shootout victory and add my name to the list of Maselli Classic champions.”

Decker, Petaluma’s Late Model champion, settled for the runner-up finish with Anthony Restad of Santa Rosa, finishing third. Bobby Hogge IV held on for a fourth-place finish, even after his left-front tire went flat late in the race. Mike Kirby of Torrance, was fifth while Nick Bartels of El Segundo, rallied from the tail of the field to finish sixth after being involved in an early caution.

John Silva of Fremont, posted a new track record when he topped time trials with a lap of 14.212 seconds. He ended up 15th in the main event.

The tour heads to Bakersfield (Calif.) Speedway for the Budweiser Nationals Oct. 7-8 and will complete the season in Peoria, Ariz., on Nov. 4-5 for the Desert Classic at Canyon Speedway Park.