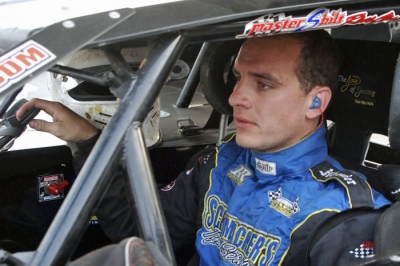 A nearly perfect weekend got Ryan Unzicker back on track — and back on top of the UMP DIRTcar Late Model points standings in the waning weeks of the chase for the $20,000 championship.

With a second-place finish on Sept. 9 at Kankakee (Ill.) County Speedway and back-to-back victories on Sept. 10 at LaSalle (Ill.) Speedway and Sept. 11 at Tri-City Speedway in Pontoon Beach, Ill., El Paso, Ill.’s Unzicker vaulted forward from third place to reclaim a points lead he had relinquished two weeks earlier. He ended Week 33 of the circuit’s season with a scant five-point edge (2,458-2,453) over defending champ Rusty Schlenk of Jackson, Mich.

Unzicker, 28, led the national standings from the spring until late August, when Schlenk’s sure-and-steady climb in the rankings finally reached the top spot. A rough Labor Day weekend for Unzicker — he didn’t score a top-10 finish in three starts, so he failed to gain any points in a battle that’s determined using drivers’ best - finishes – dropped him to third in the standings.

But the young driver roared back last weekend, adding points with all three of his starts. His pair of triumphs pushed his 2011 win total to 14.

The 25-year-old Schlenk, meanwhile, made two UMP-sanctioned starts last weekend but only earned points in one of them — a third-place finish on Sept. 9 at Cherry Raceway in Fife Lake, Mich. He placed 16th on Sept. 10 at Thunderbird Raceway in Muskegon, Mich.

Jon Henry of Ada, Ohio, fell from second to third in the national points standings. But while his deficit to the leader expanded from 29 to 52 points after he was unable to finish well enough in his single start to add points to his total, he nonetheless was happy with his weekend performance — he qualified for the prestigious World 100 at Eldora Speedway in Rossburg, Ohio, finishing 28th.

I-80 SPEEDWAY PROMOTER FACES PRISON TIME: Ed Kosiski, a retired champion dirt racer and promoter of I-80 Speedway in Greenwood, Neb., faces one to 50 years in prison after pleading no contest last week to attempted sexual assault of a child. Kosiski, the 1998 NASCAR Weekly Racing Series champion, will be sentenced in December. The 46-year-old was the sixth person convicted after a federal probe last winter broke up a prostitution ring involving underage girls. Kosiski is a member of Nebraska's most famous dirt racing family. His father Bob Kosiski is a local racing legend while brothers Joe and Steve are members of the National Dirt Late Model Hall of Fame. — Omaha (Neb.) World-Herald

DISCOUNTS FOR EARLY MAGNOLIA STATE 100 ENTRIES: Drivers entering the 22nd Magnolia State 100 by Sept. 18 will receive a discount on entry fees for the Sept. 22-24 event at Columbus (MIss.) Speedway. Drivers who verbally commit to the race pay $50 at the gate for an entry fee instead of $125. Drivers may pre-enter by calling Dewitt Singleton at (601) 917-1500 or Ben Shelton at (901) 335-3037. The unsanctioned event is among the South's richest with $20,011 going to the winner out of a total purse of more than $70,000. Last year's event drew nearly 200 race teams in all divisions and more than 60 Super Late Models. Two-time winner Mike Marlar of Winfield, Tenn., won last year's event. Complete race information can be found at www.columbusspeedway.net. — Ben Shelton

ELKINS CLINCHES NeSMITH REGIONAL CROWN: Jimmy Elkins Jr. of Talladega, Ala., has clinched the $5,000 NeSmith Chevrolet Weekly Racing Series East Region Championship sponsored by Old Man's Garage. “This championship in the means the world to me and it is the highlight of my life,” Elkins said. “This has been a rough year for me personally off the track, and racing has given me something to focus on to get all of that off my mind." Elkins outpointed his cousin Adam Gauldin for the title using a 7-year-old chassis. — Roby Helm

ODD AND ENDS: The inaugural Topless Thunderfest at Thunderbird Speedway in Muskogee, Okla, has released purse information for the Sept. 23-24weekend sanctioned by MARS and NCRA. Friday's race pays $2,500-to-win and $350-to-start while Saturday's race pays $3,000-to-win and $400-to-start. ... Thunderhill Raceway in Summertown, Tenn., has added the $4,000-to-win Topless Brawl for Super Late Models to its scheduled on Sept. 24. ... Check out DirtonDirt.com's DirtWire for recent series schedule changes. ... Shepp's Speedway in Alexander, Ill., has closed for the season. ... Baton Rouge (La.) Raceway has cancelled remaining events with the exception of the season-ending Louisiana State Championship on Nov. 11-12.