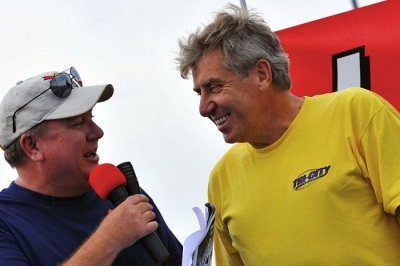 Tri-City Speedway promoter Kevin Gundaker will stand in victory lane Friday and present a $10,000 check to the winner of his track’s World of Outlaws Late Model Series Kehrer Brothers Roofing 50. And Gundaker will completely understand the triumphant driver’s joy over capturing a World of Outlaws event. He has, after all, experienced it.

A standout dirt Late Model racer at tracks across the Midwest before shifting his focus to operating Tri-City Speedway in 2005, Gundaker is one of just two promoters of facilities on the 2011 WoO schedule who has won an A-Main on the renowned tour.

Gundaker’s big WoO moment came on Aug. 4, 1989, at Sante Fe Speedway, a short half-mile oval in Hinsdale, Ill. (outside Chicago) that closed following the 1995 season and was sold shortly thereafter to make way for a housing development. He won during the tour’s short-lived original incarnation organized by late WoO Sprint Car Series founder Ted Johnson, who ceased his full-fender circuit’s operation after two seasons (1988-89). The series sat silent until resuming action in 2004 under the World Racing Group banner.

“I remember that race,” said Gundaker, now 56 and hailing from St. Charles, Mo. “I have 392 career wins, but that World of Outlaws win stacks right up there near the top.”

Gundaker always lists his best race and worst race as the 1980 World 100 at Ohio’s Eldora Speedway, where he finished second to Charlie Swartz by about 3 feet. (“Let’s face it,” he said, “at the World they don’t remember who runs second. Swartz has that globe sitting there in his trophy room and I don’t.”) But his World of Outlaws success at Sante Fe holds a special place in his personal highlight reel.

“We led the whole thing, but Billy Moyer and I had a heck of a battle the whole way,” Gundaker said of his score in a World of Outlaws feature that ran over the 40-lap distance. “He got by me on the white-flag lap, but I was able to get right back by him and went on to win it. When it was all over and done with, I couldn’t have been happier.”

Driving his own Bullitt Chassis No. 11 at the time, Gundaker led Moyer, John Provenzano, Gibby Steinhaus and Bob Pohlman Jr. across Sante Fe’s finish line. If his memory is correct, he believes he earned $4,000 for what would be the lone WoO victory of his career.

Gundaker didn’t enter all 21 WoO LMS events contested in 1989, but he ran enough to finish fifth in the points standings behind Moyer, who won the championship for the second straight season, Steve Francis, Willy Kraft and Rick Aukland. He registered one other top-five finish that season, placing second behind Donnie Moran in a preliminary to the USA Nationals at Cedar Lake Speedway in New Richmond, Wis.

While Gundaker tended to pick-and-choose his starts rather than points-race with series during the 18 years he made his living as a dirt Late Model driver, he thought the WoO LMS had potential to continue growing through the ‘90s if Johnson hadn’t decided to shut it down. “There’s no doubt it could’ve gotten bigger,” said Gundaker, who cited Johnson’s desire to focus on his WoO Sprint Car Series following a challenge from a rival touring series as a major factor in the full-fender tour’s early termination.

A 2011 inductee of the National Dirt Late Model Hall of Fame, Gundaker hasn’t raced regularly since 2005 but asserts that he’s not “officially retired.”

“I still want to race. I still have the desire,” said Gundaker, who whet his appetite for speed by hot-lapping Randy Korte’s dirt Late Model after a mid-July program at Tri-City. “But now with us running a racetrack (he shares operational duties at Tri-City with his wife Tammy), you’re very limited in the time you have to focus toward a race car and a racing program.

“I really miss driving, but I just don’t have the time to do it anymore. We’re really busy with the racetrack.”

Gundaker does plan to climb back behind the wheel for competition in the near future. He has two sons in racing — Dane, 28, runs a UMP Modified, and Gordy, 19, is a UMP Pro (crate) Late Model racer who will make his full-blown Late Model debut during the Sept. 22-24 Modified Mania program at Tri-City — and they want a piece of dear old dad.

“My boys are wanting me to compete against them and I promised them I would,” said Gundaker. “They’ve been talking that smack on me, how they’re gonna whip me and all that. But it’s kind of like I told them — I taught them everything they know, but I didn’t teach them everything I know.”

Gundaker is one of 53 drivers with at least one victory in WoO history, including the 1988-89 seasons and the modern era (2004-present). The only other promoter of a track on this year’s series able to claim a WoO victory is Johnny Stokes of Columbus (Miss.) Speedway, who was victorious on July 8, 1988, at Enid (Okla.) Speedway.

At least 16 former WoO winners are expected to compete Sept. 16 in the tour’s first-ever event on Tri-City’s 3/8-mile layout, which was shortened by Gundaker from its original half-mile distance prior to the 2008 season.

Pit gates are scheduled to open at 1 p.m. and the grandstand gates will be unlocked at 3 p.m. on Friday. Hot laps are set to begin at 6:30 p.m. with competition getting the green flag at 7 p.m.

With racing for the DIRTcar UMP Modifieds, Pro Late Models and Street Stocks also on Friday night’s agenda, general admission is $30. Children 12-and-under will be admitted free of charge.

Pit passes are $35, but a special deal grants support-class drivers and three of their crew members entry to the pits for $25 apiece provided they all sign in at the same time.