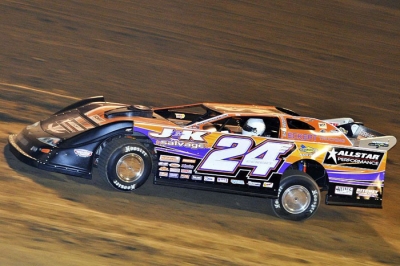 Rick Eckert has tried all season to avoid thoughts of the $100,000 World of Outlaws Late Model Series championship prize, but he can no longer simply disregard the obvious.

When the national tour invades the Midwest this weekend for a huge doubleheader at Tri-City Speedway in Pontoon Beach, Ill., Friday night and I-55 Raceway in Pevely, Mo., Saturday night, Eckert’s focus will be set squarely on doing what it takes to top a points battle that he has led since early May.

“At this point you have to think about it,” Eckert said when asked if visions of a career-first WoO title have begun dancing in his head. “When you’re down to the last seven races, the championship has to be on your mind.”

Eckert, 45, of York, Pa., carries a precarious 28-point lead over two-time defending series champion Josh Richards of Shinnston, W.Va., into this weekend’s action, which features the Kehrer Brothers 50 at Tri-City and the 29th annual Pepsi Nationals at I-55. Both races will pay $10,000 to the winner.

The WoO stretch drive promises to be a tense affair for Eckert. He maintained a healthy edge of 42 to 60 points over Richards for a nine-race summer stretch, but the gap became a little too close for the veteran’s comfort after he recorded a season-worst finish (16th) in the tour’s last full points show on Aug. 20 at Merritt Raceway in Lake City, Mich.

“We haven’t run good the last couple races, so we’re gonna have to pick the pace up,” said Eckert, whose remarkably steady 2011 performance record shows two wins, 14 top-five and 22 top-10 finishes in 27 WoO events. “Josh isn’t making it easy for us. He’s gonna either win or run up front, so we know where we gotta finish – up front.

“It isn’t like we’re racing a guy for the championship who isn’t running good. He’s running real good right now. The only thing we can do is keep our heads up and keep getting after ‘em.”

This weekend’s St. Louis-area twinbill should provide Eckert an opportunity to jump-start his run toward the points crown. He likes both tracks and has run well at both in the past, buoying his confidence for the trip to the Midwest with his Team Zero by Bloomquist Race Car.
Friday’s program at Tri-City will mark the track’s first WoO event since promoter Kevin Gundaker shortened it from a sprawling half-mile to a three-eighths-mile oval prior to the 2008 season. Eckert, who placed seventh in a WoO event run on Tri-City’s old half-mile on Aug. 1, 2004, got a taste of the more compact layout last year when he finished fourth in a mid-September DIRTcar UMP-sanctioned show.

“I think the racing there is way better since Gundaker made it smaller,” said Eckert. “Gundaker doesn’t do anything half – he did everything first-class when he redid it. It’s a real neat little place, a real fun place to race. It can be wide open, and then you flip a switch and it can change to icy-slippery. It can throw some curves at you.”

Eckert has made four WoO appearances since 2005 at I-55, a high-banked, 11/32nd-mile oval that is co-promoted by NASCAR veteran Ken Schrader and Ray Marlar. His finishes have gotten progressively worse – he was fourth in the ’05 event and then fell to sixth in ’07, seventh in ’08 and 12th in ’10 – so he’ll be looking to reverse that trend on Saturday night.

The 23-year-old Richards, meanwhile, will make his first start on Tri-City’s three-eighths-mile and his fifth career visit to I-55. His best WoO runs at I-55 have come in his most recent appearances; after finishes of 14th in ’05 and 13th in ’07, he was a contending third in ’08 and sixth last year.

Richards also heads into the weekend with more World of Outlaws momentum than Eckert. Since experiencing a season-low 21st-place finish on July 15 at River Cities Speedway in Grand Forks, N.D., he’s won four of his seven 2011 A-Mains and has finished outside the top-five just once (an 11th-place finish) in 10 races.

But while Eckert has struggled in his last two WoO starts – he followed up his subpar outing at Merritt by failing to qualify for the 45-lap Sweet Sixteen finale of the unique Black Diamond 125 event on Sept. 3 at Tyler County Speedway in Middlebourne, W.Va. (an event that offered only show-up points) – he’s certainly not in a slump. In the 17 races since he scored his second victory of the season on May 12 at Delaware International Speedway, he has six runner-up finishes and has placed worse than eighth just twice.

Eckert is enjoying his best WoO campaign since 2006 when he recorded a tour-leading eight victories and was in the thick of the title chase until August. He faltered down the stretch that season (finishing seventh in the points standings) and did not seriously challenge for a championship over the next four years, fueling his desire to capitalize on the opportunity currently staring him in the face.

“Winning the championship would be a great thing to experience and it would be great for our program,” said Eckert, who is in his second season of fielding his own equipment following a 15-year run driving for the late Raye Vest. “I know after the last championships we won (back-to-back UDTRA national titles in 2001-02) we were able to get some extra product help for the next year or two, and since we’re on our own now that would be a huge boost for us. The extra income would be really nice too now that I own everything.

“We’re gonna take it one race at a time and race as hard as we can,” he continued. “It’s not a secret that each race (the points pursuit) does get a little more stressful, but we’ve been there before (with the UDTRA title battles) and there’s really nothing we can change. We just gotta go to every race left and run the best we can.

“It’s not like we’re going anywhere and saying, ‘If we finish top 10, we’re good.’ We know how good Josh is running, so we have to go to every race knowing we most likely have to be in contention to win.”

This weekend’s Tri-City/I-55 swing is expected to rank as arguably the most talent-laden doubleheader on the 2011 WoO schedule.

Eckert and Richards will pace a star-studded roster of WoO regulars that features former champions Darrell Lanigan of Union, Ky. (winner of the ’04 WoO event on the Tri-City half-mile) and Tim McCreadie of Watertown, N.Y. (victor in a DIRTcar UMP special last September at Tri-City). Other Outlaw travelers include Chub Frank of Bear Lake, Pa., Shane Clanton of Fayetteville, Ga. (’08 winner at I-55), Austin Hubbard of Seaford, Del., Clint Smith of Senoia, Ga. (’07 winner at I-55), Tim Fuller of Watertown, N.Y., Vic Coffey of Caledonia, N.Y., and Rookie of the Year contenders Pat Doar of New Richmond, Wis., Ron Davies of Warren, Pa., and John Lobb of Frewsburg, N.Y.