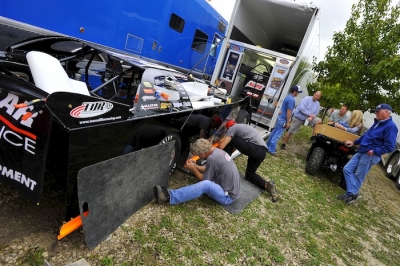 ROSSBURG, Ohio (Sept. 8) — Traditionally at Eldora Speedway's World 100, many Dirt Late Model teams arrive Thursday to snare an infield pit stall, push their cars through UMP DIRTcar technical inspection line, then load up the hauler and kick back to enjoy a few adult beverages before the big race gets rolling with Friday's time trials.

But rain and wet conditions Thursday at Eldora threw a kink in those plans when officials scrapped technical inspection, rescheduling it for 9 a.m. Friday at the historic half-mile oval. Alarm clocks will ring much earlier than normal tomorrow morning. | Complete World 100 coverage

“It’ll be about the same," said driver Steve Casebolt of Richmond, Ind., when asked about the schedule shuffling. "We’ll just have to make an earlier night of it than we’d like to, I think.”

Besides the schedule crimping social plans, crews will have to go into hurry-up mode Friday to run through maintenance programs and make sure everything's ready for the 41st version of the sport's most prestigious race.

"It's just going to make it more hectic tomorrow," said Steve Norris, crew chief for six-time race winner Billy Moyer. "Tomorrow you need to hurry up and get your stuff done and get ready for hot laps. ... It will put a little more pressure on."

Norris said Moyer's No. 21 Victory Circle Chassis is "95 percent ready," but he's confident the team will be back on schedule Friday. "I may be behind, but hopefully we're ahead at the end."

Austin Dillon of Lewisville, N.C., last year's fast qualifier at the World 100, was putting the finishing touches on a new car he wrecked Sunday at Eldora in a tuneup race.

“It’ll be an early morning in the morning for tech at 9 I think," he said. "If we can get some stuff done, we don’t have to worry about thrashing all day.”

One thing that may help tech inspectors — but disappoint some fans — is what appears to be the race's smallest car count in many years. About 70 teams were counted on the grounds at about 8 p.m. on the overcast and damp Thursday night, meaning it's unlikely the race will match the 134 cars that entered last year's event.

Illinois upstart Brandon Sheppard is a mash-the-accelerator dirt racer, making his mark this season with a pair of UMP DIRTcar Summernationals victories, including a career-high $10,000 payday at Farmer City (Ill.) Raceway.

The 18-year-old from New Berlin tackles a bigger stage of UMP-sanctioned action this weekend at Eldora, and while mashing the accelerator is required, the half-mile is a different animal from the quarter- and fifth-mile tracks where Sheppard's been best. He's confident he can adjust.

Sheppard said he plans to "be patient and be smooth — and be up on the wheel at the same time — if that makes any sense."

He's been to the legendary track a few times as a spectator, and competed in last year's UMP Nationals, logging 10 laps or fewer after problems in his heat race. He hopes to make more laps this weekend — maybe even 100 in the feature event as one of the youngest starters in history.

"It's just another racetrack, that's the way I'm going to look at it at least," Sheppard said. "There's a lot of competition though. We're just going to try and get in the show."