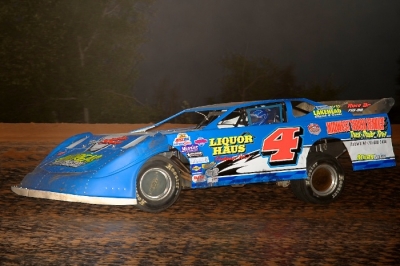 Nelson repeated his victory in last year's opener of the double header while Hanson, formerly a resident of nearby Duluth, Minn., grabbed his first feature victory at Proctor in 20 years. Harry Hanson of Eveleth, Minn., was the only driver to notch top-five finishes in both caution-free races, which saw the top 16 finishers from the first event inverted for the lineup for the second feature.

In the first feature, Nelson took the lead from the pole position with Don Copp, Eric Breeschoten and Steve Laursen giving chase. Nelson built nearly a straightaway lead on Copp and then began maneuvering through lapped traffic, maintaining and edge on Copp. Nelson went on to win with Copp, Breeschoten, Adam Hensel and Harry Hanson in the top five.

John Henkemeyer and Kerry Hanson started on the front row in the nightcap and Hanson blitzed the field at the outset while Henkemeyer, Jeff Provinzino, Caley Emerson and Tim McMann pursued him. Hanson put it in cruise control out front, but Kyle Peterlin stormed forward from his eighth starting spot, cutting into the lead. Peterlin fell a half-length short at the finish with Henkemeyer, Harry Hanson and Tommy Waseleski Jr. rounded out the top five.

Notes: Nelson is sponsored by Tarnowski Bros. Construction, Amsoil, Hermantown Storage and U.S. Steel. ... Kerry Hanson is sponsored by Liquor Haus, Midwest Truck Service and Andreas Construction. ... Non-qualifiers for the features received $271 as fans and businesses donated to a special fund, increasing the $100 tow money. ... Stewart Hayward of Calgary, Alberta, won the long-haul award. ... A $1,000 bonus was on the line for a driving sweeping the main events. ... Harry Hanson's highest average finish paid him a $500 bonus.