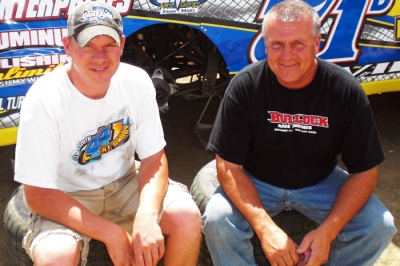 WoO rookies John Lobb (left) and Ron Davies (rihgt) get to race close to home over the next week.

Ron Davies and John Lobb are long-time buddies. They share the same race shop. They’re spending the 2011 season caravanning together across the country as rookies on the World of Outlaws Late Model Series.

And of course, they’re both eagerly anticipating the coming week. The World of Outlaws, after all, will contest a three-race swing on the veteran drivers’ familiar Keystone State turf in coming days.

After logging thousands of miles this year on the renowned national tour, Davies and Lobb will get a chance to face off with the World of Outlaws stars at a trio of tracks that sit virtually in their backyards. The series is scheduled to make first-ever visits to Dog Hollow Speedway in Strongstown, Pa., on Tuesday and McKean County Raceway in East Smethport, Pa., on Wednesday before returning for the fifth consecutive year to Eriez Speedway in Hammett, Pa., on Sunday.

Davies and Lobb understand what’s at stake for them this week. Both have found the going tough in their first year on the road with the Outlaws, so they must take advantage of some home cooking.

“If we’re really going to have a shot to capitalize and get a win anywhere, it’s going to be these places coming up,” said Davies, a 53-year-old from Warren, Pa., who decided to broaden his racing horizons to a national level this season after focusing on local and regional racing for three decades. “These tracks should be good for us – especially Smethport (McKean County) and Eriez. We’ve won a lot of races at both places over the years.”

“This is where we have to shine, no question about it,” said the 41-year-old Lobb, who lives just north of the Pennsylvania border in Frewsburg, N.Y. “McKean and Eriez have been my home tracks for years, so this is our best shot.”

Dog Hollow, a 4/10-mile oval located near Indiana, Pa., is the lone track from this week’s swing that neither Davies nor Lobb know intimately. Davies’s only career start there came roughly a decade ago when he drove for an Ohio-based team.Lobb entered a race there several years ago but never even took a lap around the speedway before the event was rained out.

Davies and Lobb possess much deeper histories at McKean County and Eriez. They have won features at both tracks and Davies even scored his career-best WoO finish at Eriez, finishing second to two-time defending tour champion Josh Richards of Shinnston, W.Va., in last year’s event despite racing with his left thumb heavily bandaged due to a cut tendon he suffered in a mishap away from the track.

Beating experienced World of Outlaws standouts like Richards (three-time winner in ’11 and currently second in the points standings), points leader Rick Eckert of York, Pa. (’09 series victor at Eriez), Darrell Lanigan of Union, Ky. (series-leading four wins this season), Tim McCreadie of Watertown, N.Y. (third in the points and closing after winning for the first time this season on July 15 in Grand Forks, N.D.) and Chub Frank of Bear Lake, Pa. (a local legend who cut his teeth at Eriez and McKean County and has won at Dog Hollow) anywhere is a chore, but Davies and Lobb believe they can use their knowledge of the Pennsylvania tracks to pull off an upset.

And while they enter this week’s swing ranked only 12th (Davies) and 13th (Lobb) in the WoO points standings through 18 events – putting them behind Pat Doar of New Richmond, Wis. (11th in the points) in the battle for the tour’s Rookie of the Year award – they feel buoyed by the recent strides they’ve made with their performance on the ultra-competitive series.

Davies, in fact, is just one race removed from his run of the year. On July 15 at River Cities Speedway in Grand Forks, N.D., he passed Jimmy Mars of Menomonie, Wis., for the lead on lap five of the 50-lapper and appeared primed to bid for victory. He made a heartbreaking miscue on lap six, however, sliding over the turn-three bank to fall from contention.

“We haven’t really had the finishes that we were wishing for, but all in all we haven’t really tore up much stuff and we’ve have some opportunities to capitalize and just didn’t do it,” said Davies, whose season-best finish is a sixth on May 8 at Needmore Speedway in Norman Park, Ga. “The one at Grand Forks, man, that’s the one that will be hard to forget. I knew we were good there. We took off and got by Jimmy for the lead so I felt pretty sure we had at least a top-five car. I just made a mistake and drove off the track.”

There’s no room for error on the national circuit, a fact Lobb has learned as well.

“It’s tougher than I even could have thought it would be,” Lobb said of the challenge he took on campaigning the Kennedy Motorsports cars on the WoO. “You have to be on the gas all the time. Racing with these guys you learn that you gotta race harder than you ever thought you could run.

“It’s quite a learning curve,” he continued, “but when we go home and race (weekly shows), we’re better now. We find ourselves just driving so much harder than the local guys.”

Lobb hopes his recent improvement on tour will translate over to the home front this week.

“We’ve struggled really bad (on the series),” said Lobb, whose single top-10 finish this season is a ninth, also at Needmore. “We had some motor problems early and got that ironed out, and we got off our page from what we’ve done in the past by trying some new stuff that just didn’t suit me. In the past couple weeks we’ve gone back to what we used to do — back to last year’s plan — and even though our finishes don’t show it, we’ve been much better our last few times out.

“I really thought the other night at Grand Forks we had a top-five race car, but we lost our brakes with about 15 to go (and finished 13th). A run like that is encouraging and it’s why I’m looking forward to the season from here on out.”

Racing in front of dozens of family members and friends should help Lobb’s psyche even more.

“I’m definitely excited about these shows,” said Lobb, who since April has been preparing his cars in Davies’s shop in Warren, Pa., as he makes plans to build a new garage of his own. “I get text messages all the time from people at home saying how they can’t wait until we run at our home tracks.”

Davies also has an army of backers anxious to see him return to his native territory as an Outlaw. He wants to give them all something to cheer about.

“It’s going to be a lot of fun,” Davies said of the tour’s western Pennsylvania tripleheader. “We have a lot of fans around the area and all of our sponsors are from around the Erie area. They’re all behind us so much. I mean, I contacted all of our sponsors at the beginning of the year and told them I was gonna do the Outlaw deal instead of racing locally, and every one of them said, ‘We’re on board with you.’ That kind of support makes it even more exciting to come back home and race because they’ll all be there to see us. Hopefully we’ll have a good showing for them.”

In the same manner that the gentlemanly Davies is savoring his first trip around the WoO loop — “I’m glad we’ve done it,” he said. “I have no regrets at all about trying this” — he will enjoy having a week of Outlaw racing so close to his front door. He expects to host several WoO travelers at his shop during the stretch, including his future son-in-law Shane Clanton of Fayetteville, Ga., and Doar, who has developed a friendship with Davies and Lobb and taken to traveling from race-to-race with his Rookie of the Year rivals.

Davies even accompanied Doar to a pair of WISSOTA Late Model events in Minnesota and South Dakota on off-nights during the recent WoO Wild West Tour, helping the veteran from the upper Midwest in the pits and “rooting for him” from the stands.

“It’ll be nice to race by the house,” said Davies, whose sponsor, Penn Gold, is serving as the title backer of Wednesday’s event at McKean County. “Dog Hollow is two-and-a-half hours from us and Eriez and McKean are one hour, so we’re pretty much right in the middle of everything. We’ll be able to go back to the shop and work every day and we’re going to bring a few guys back with us.

“It seems like everyone wants to go see the oil stuff that we do (he makes his living operating Weldbank Energy, an oil- and gas-producing firm). They’re all intrigued by that, so it’ll be fun to take them around and show them during the off days of the swing.” 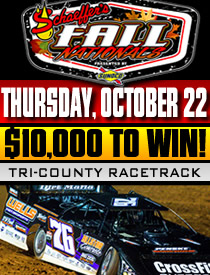