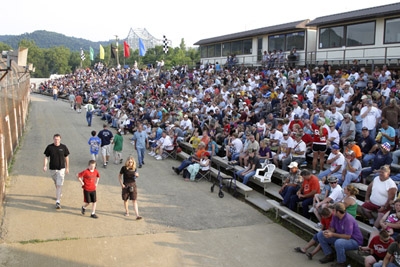 Another major event has fallen victim to the delayed shortening and reconstruction of West Virginia Motor Speedway.

"I never thought I would be having the Hillbilly anywhere but West Virginia, but regretfully the renovation work at West Virginia Motor Speedway hasn't progressed as scheduled, and quite frankly there just isn't another facility in the state that can handle the event," Short said in a series release.

The move to Portsmouth reshuffles the Lucas Oil schedule for the holiday weekend, which originally called for a two-day, $20,000-to-win event at Portsmouth preceding Sunday's Hillbilly at WVMS. Now Portsmouth will host a Saturday-Sunday doubleheader with two complete programs.

The venue and schedule change reduces the original $43,000 winner's purse of the Hillbilly 100. The event has paid at least $40,000 to the winner each of the last three seasons.

The Hillbilly marks the fourth Dirt Late Model event scrapped at West Virginia Motor Speedway, which is in the midst of an ambitious project by Mountain State Motorsports Promotions to shorten the track to 3/8-mile from its original 5/8-mile configuration. Promoters announced reconstruction plans in January, but a wet spring and other delays have prevented completion of the new track. A World of Outlaws Late Model Series event at WVMS has been postponed and eventually canceled.

Last season, WVMS hosted Short's Hillbilly 100 and Dirt Track World Championship, but both races are scheduled for Ohio tracks in 2011. The DTWC, which also joined the Lucas Oil circuit, is scheduled for Oct. 13-15 at K-C Raceway.

The relocated Hillbilly 100 sets up the biggest weekend in history of Portsmouth's 3/8-mile oval.

"It took a little changing around of schedules to make it work," said PRP co-promoter Donna Rayburn. "We feel like we have come up with something that will be great for both the racers and the fans."

The track has posted a $5,000 bonus for any driver who can sweep Portsmouth's Lucas Oil events Sept. 3-4.

Portsmouth plans to offer discount two-day tickets, $50 for general admission and $70 for pit passes. Individual tickets are $25 on Saturday and $30 on Sunday; individual pit passes are $35 and $40.