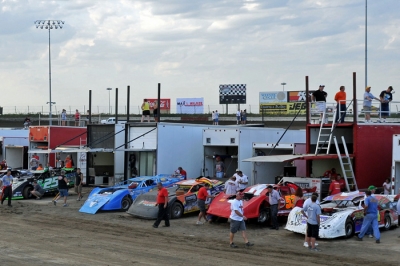 The infield pits at I-80 Speedway. (fasttrackphotos.net)

Instead of qualifying against the clock, the track plans to employ a unique qualifying procedure with every driver running a pair of heat races on Friday night. If there are 80 cars are fewer, the field will be split among five heat races for a total of 10 heats. | Chris Simpson eyes Silver Dollar Nationals

After the first set of heat races, a second set of heats will run using inverted lineups. For instance, if a driver starts on the pole in the first heat, he'll start on the tail in the second heat.

The accumulated passing points of heat-race finishers will lock the top 20 into the main event.

In another twist, heat race distances won't be set until the car count is established. Heat races will be two laps more than the total of cars in the most crowded heat. For instance, if the first heat race has 12 cars, all the heat races will be 14 laps.

While many two-day events don't reward drivers for heat race finishes, I-80 plans a $500 purse for each heat race split among the top three finishers. Winners receive $250, runners-up receive $150 and third-place finishers pocket $100.

Besides the 20 drivers transferring through heat races, six more will transfer through consolation races, along with two provisionals apiece from MLRA and the Nebraska-based Super Late Model Racing Series. Three other positions go to guaranteed starting spots (see below) and potentially an auctioned position.

THREE DRIVERS GUARANTEED SPOTS: I-80 Speedway has reserved three starting spots in the 33- or 34-car Silver Dollar Nationals field for winners of previous Late Model specials this season at the track. Brad Looney of Republic, Mo., is guaranteed a spot by virtue of his April 2 victory; Chad Simpson of Mount Vernon, Iowa, clinched a spot with his May 29 victory; and Jason Utter of Columbus Junction, Iowa, secured a starting position with his July 1 victory. If Looney, Simpson and Utter transfer to the 80-lap feature otherwise, the positions will go to the succeeding highest finishers in those races.

FANS WELCOME TO PITS ON SATURDAY: Early-arriving fans can visit the pits Saturday free of charge early in the afternoon, the track announced. Fans who have purchased a grandstand ticket or pit pass for Saturday's action can meet drivers and get a closer look at the race cars. The pits will close at 3 p.m. to all except those who have pit passes.

DEALING WITH THE HEAT: Summer has its full grip on the Plains State with forecasts for high temperatures well in the 90s for the weekend action. Because of the heat, the track has tentatively planned to push racing back a bit, starting hot laps at 7 p.m. nightly with the national anthem to follow. Racing will begin immediately after that. Track officials hope the slightly later schedule provides for a better racing surface and more comfortable weather for the fans.

TOURING MODIFIEDS IN ACTION, TOO: Besides the Super Late Model event, Great Plains Region of the United States Modified Touring Series will be in action on Friday and Saturday with two complete programs. USMTS president Todd Staley has fielded calls from driver as far away as Arizona, New Mexico and California, some of whom may be planning to head to the following weekend's World Dirt Modified Championships at Deer Creek Speedway in Spring Valley, Minn. Nine-time USMTS national champion Kelly Shryock of Fertile, Iowa, leads Ryan Gustin of Marshalltown, Iowa, in the point standings on the Farm Boy BBQ Sauce Great Plains Region. Among drivers expected to compete in the modified division are Springfield, Mo., teammates Terry Phillips and Jeremy Payne, who apparently aren't competing in the Late Model action.

THURSDAY NIGHT ACTION AT I-80: While touring Super Late Model and modified drivers will only be practicing on Thursday, I-80 Speedway is hosting a complete NASCAR Whelen All America Series program featuring the Miller Lite Late Models, Mike’s Hard Lemonade Pro Ams, Ty’s Outdoor Power & Service B Mods and American Ethanol Green Hornets. Grandstand admission is $10 and pit passes are $30.

ODDS AND ENDS: The Late Model tire rule is limited to hard Hoosier tires, either the WRS-55 or LM-40. ... A provisional starting spot in the main event will be auctioned off with a minimum bid of $1,500, if someone is willing to pay. The amount of the bid exceeding the $1,000 start money will be split among the last 20 finishers. ... Drivers guaranteed starting spots through MLRA provisionals are Al Purkey and Kyle Berck (first and second in points); SLMRS provisionals would go to Travis Dickes and Joe Kosiski (first and second in points) if they don't transfer otherwise.